The senior enlisted leader at Air Force Global Strike Command has been fired after an investigation found he had sent inappropriate texts to a junior enlisted airmen during his previous assignment in Washington, D.C. 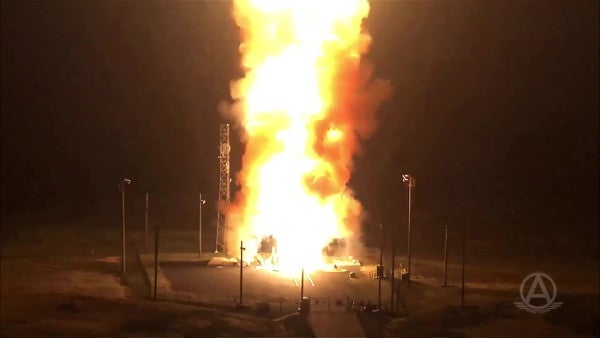 The senior enlisted leader at Air Force Global Strike Command has been fired after an investigation found he had sent inappropriate texts to a junior enlisted airmen during his previous assignment in Washington, D.C., Air Force officials announced on Friday.

Command Chief Master Sgt. Thomas B. Mazzone has been punished administratively but not reduced in rank, said Air Force Global Strike Command spokesman Capt. Earon Brown. Mazzone is being reassigned within the command, which has purview over the Air Force's nuclear bombers and missiles.

“There was sufficient evidence that showed that Chief Mazzone had engaged in an unprofessional relationship through sending inappropriate text messages with this junior enlisted member for an extended period of time,” Brown told Task & Purpose.

The enlisted airman was assigned to a subordinate wing while Mazzone was command chief at Air Force District Washington, Brown said.

“It was also determined that for good order and discipline, it was necessary to remove Chief Mazzone from the command chief position,” Brown said.

Mazzone is the latest member of Global Strike Command to be fired for misconduct. Its former deputy commander Brig. Gen. Paul W. Tibbets IV was forced to retire without receiving his second star in September after an investigation found he had made inappropriate comments about women and not reporting suicide attempts during a previous assignment.

Tibbets is the grandson of the Brig. Gen. Paul Tibbets Jr., who piloted the B-29 that dropped the first atomic bomb on Japan in 1945.

More recently, Lt. Col. Paul Goossen was fired as the commander of the 69th Bomb Squadron in November because his airmen used Microsoft Paint to draw penises.

SEE ALSO: Oops, I Did It Again: Airmen Lose Machine Gun After Losing Box Of Grenades