"Exceptional job performance does not matter if our Airmen do not live by our core values." 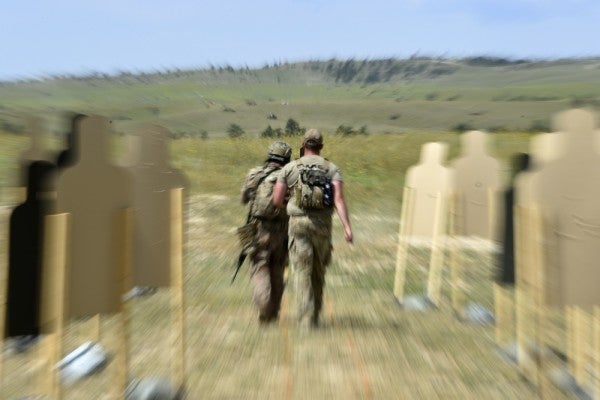 Guarding an Air Force Base in the middle of Wyoming must get dull at times, even if the weapons behind you could cause a worldwide nuclear holocaust at a moment's notice. Maybe that's part of the reason why airmen at F.E. Warren Air Force Base have made headlines again for alleged drug use.

This time, an unknown number of defenders from the 90th Security Forces Group were removed from their duties and are being investigated in response to reports of marijuana use, according to a statement released by Air Force Global Strike Command on Monday.

“Exceptional job performance does not matter if our Airmen do not live by our core values,” Ray said in a statement. “NCOs and officers must set and enforce the standards for our junior Airmen. We must create an environment that fosters warfighting excellence, esprit de corps, and thriving Airmen—off and on duty.”

The incident is the latest in a long line of trippy episodes at F.E. Warren. In 2016, Air Force investigators discovered a so-called drug ring where defenders, according to documents obtained through the Freedom of Information Act, imbibed LSD, cocaine and other drugs, which one can imagine might be a problem in the sober field of protecting weapons of mass destruction.

In that episode, six airmen were convicted at court-martial, while another deserted for Mexico, according to the Associated Press. Later, in May, two airmen were punished for drinking while off-duty at the missile alert facility for 150 nuclear LGM-30G Minuteman III intercontinental ballistic missiles.

Next, in September, Lt. Col. Nicholas Petren, commander of the 90th Security Forces Group, was relieved of command “due to a loss of confidence” in his leadership.

Petren's relief may have been part of a larger leadership shake-up which the Air Force said had taken place across Global Strike Command.

“After years of successes and government-wide revitalization of the command, the four-star general wanted to reemphasize standards,” said the command's public affairs team, in reference to Gen. Ray.

“Our solemn duty is to protect this Nation; the majority of our Airmen are exceptional and have made significant gains in ensuring excellence and adhering to exacting standards,” Ray said in the statement. “But we will not give up one inch of this hard-earned ground. When any of us see those not living up to our high standards, we will hold them accountable using all of the disciplinary tools available under the military justice system.”

The general also reminded airmen of the need for “authentic leadership,” the statement said.