The Air Force's replacement for the iconic UH-1N Huey helicopter that defined the U.S. military presence in Vietnam is finally here, and it officially has a name clearly primed to strike fear into the heart of America's adversaries 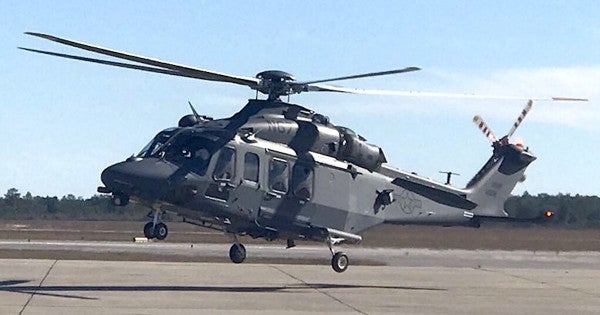 The Air Force's replacement for the iconic UH-1N Huey helicopter that defined the U.S. military presence in Vietnam is finally here, and its official designation was clearly designed to strike fear into the hearts of America's adversaries.

Air Force Global Strike Command accepted its first MH-139 Grey Wolf helicopter from defense giant Boeing on Thursday during a ceremony at Duke Field in Florida, Defense News reports, unveiling the new name for the new helo in the process.

“The Boeing MH-139A pays homage to the grey wolf, an extremely adaptable species known for its power and endurance, which contributes to its ability to roam large distances,” Boeing said in a statement. “The name falls in line with the geographical areas of the United States represented by Air Force Global Strike Command and Air Force District of Washington. As a pack animal, the Grey Wolf represents the Air Force's mission sets, which bring multiple aircraft to the fight.”

Naturally, Boeing felt the need to announce the new designation with some corny GIF action:

“Grey Wolf” reflects how #MH139 aircraft will be deployed in packs to protect intercontinental ballistic missile bases for the @USAirForce. pic.twitter.com/GbrqKjfJO0

According to to AFGSC, the new helicopter “closes the capability gaps of the UH-1N in the areas of speed, range, endurance, payload and survivability in support of the command's intercontinental ballistic missile missions.”

The unveiling of the Grey Wolf designation came one day after AFGSC stood up the brand-new Detachment 7 at Duke Field to support the testing and evaluation of the new airframe.

“I'm here to tell you, this is a big deal,” AFGSC A5/8 director Brig. Gen. Andrew Gebara said during the activation ceremony on Wednesday. “It is hard to overstate just how much blood sweat and tears have gone into getting this helicopter into our United States Air Force standing up this detachment.”

Indeed, the new helo can't get here soon enough: the UH-1N Huey helicopter that the Grey Wolf is replacing first entered the Air Force inventory nearly a half-century ago to provide search and rescue capabilities before expanding to missile security as a replacement for the service's initial HH-1H and UH-1F variants.

Developed by Bell Helicopter in the 1950s, the Huey first entered service for the U.S. military in 1959 to fulfill an Army requirement for a versatile utility and medical evacuation helicopter. The helo immediately gained iconic status after it first arrived in Vietnam in 1962 assigned to the service's 57th Medical Detachment.

“First in Vietnam and for decades wherever U.S. forces were committed, the Huey lifted them into and out of combat, brought desperately needed supplies, rushed the wounded to hospitals, filling more roles than any other aircraft of the era,” as military historian Ernest B. Furgurson put it in 2015.

No word yet if Tom Clancy was somehow posthumously consulted during the naming process.