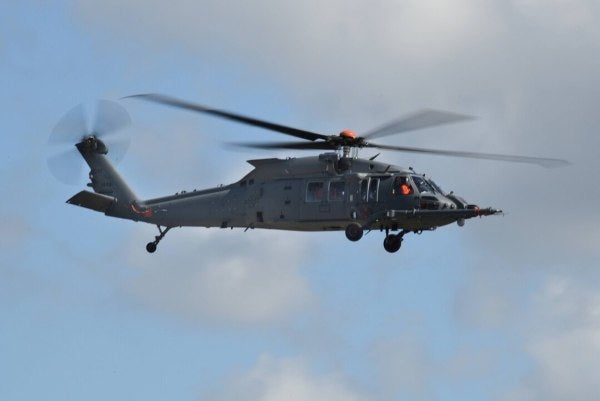 The Air Force's brand new combat rescue helicopter is ready for a fight — and now it has the cheeky new designation to prove it.

The service's new helo will be known as the HH-60W Jolly Green II, Defense News reports, a reference to the famous “green feet” impressions that the Sikorsky HH-3E “Jolly Green Giant” would leave behind while rescuing downed aviators during the Vietnam War.

“Americans owe these courageous airmen the very best equipment. The new combat rescue helicopter, the HH-60W improves range and survivability for safer search and rescue operations everywhere, every time,” Barrett said, per Defense News. “In recognition of these heroes, the Air Force is naming our newest CSAR helicopter the Jolly Green II.”

Reviving the #JollyGreen name honors our combat search & rescue crews past & present. In the hands of our #Airmen the #HH60W ensures the rescue community can perform their duties better than ever. #ThatOthersMayLive #AWS2020 pic.twitter.com/lT371xJy0b

Kamhoot was one of the original “Jolly Green” pilots who flew the HH-3E during the Vietnam War, according to the Air Force. Fisk, who received the Silver Star for his actions while manning an HH-3E Jolly Green Giant during the 1970 Son Tay Prisoner Of War Camp Raid, is credited with first noticing those famed “green feet” impressions the HH-3E would leave behind after landing.

“Reviving the Jolly Green name honors our combat search and rescue crews past and present. Those who operate this aircraft will embody the motto, ‘These Things We Do, That Others May Live,’” Barrett said. “In the hands of our Airmen, this aircraft ensures the rescue community can perform their duties better than ever.”

The symposium reportedly even featured a life-size figure of the Jolly Green Giant to celebrate the unveiling of the new name:

Not a selfie. #AWS20 pic.twitter.com/eZkDTIOZPy

The Air Force's program of record calls for the purchase of 113 combat rescue helicopters to replace its predecessor, the Sikorsky-made HH-60G Pave Hawk.

The Jolly Green II was cleared for initial production last September, the Hartford Courant reported at the time.

The Air Force has already procured 22 HH-60Ws in fiscal years 2019 and 2020, according to Defense News, and the service requested $1.1 billion as part of its fiscal year 2021 budget for an additional 19 airframes.

The unveiling of the Jolly Green II moniker comes just months after the Air Force unveiled the 'Grey Wolf' designation for its new Boeing MH-139A helicopter as an official replacement for the iconic UH-1N Huey.

“The Boeing MH-139A pays homage to the grey wolf, an extremely adaptable species known for its power and endurance, which contributes to its ability to roam large distances,” Boeing said of the name in a statement at the time.