"The hair on the back of your necks should be standing up." 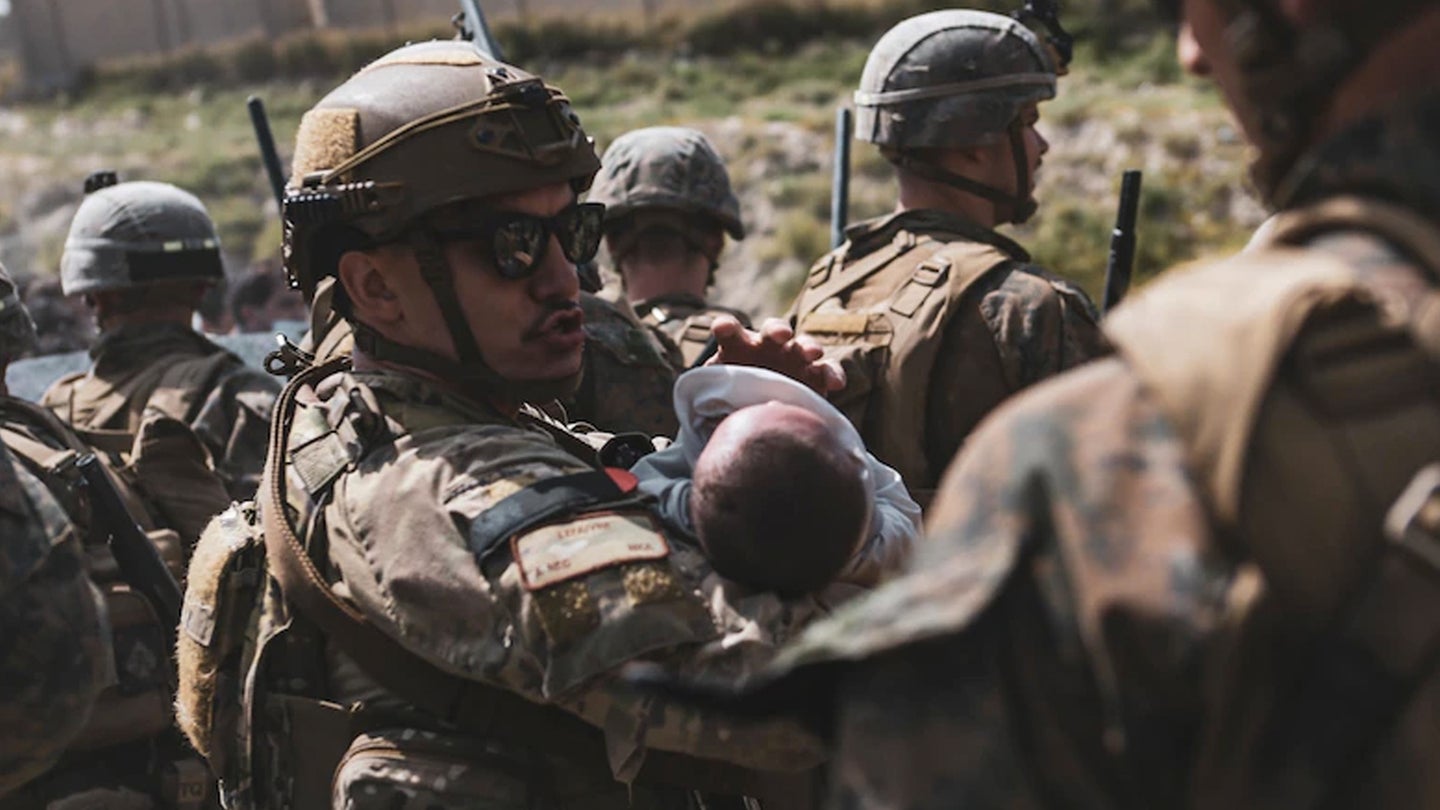 Air Force Lt. Col. Brian Desautels had been on the ground in Kabul for more than a month when the bomb went off. It was Thursday, Aug. 26, and the international airport in Afghanistan’s capital was surrounded by thousands of Afghan civilians trying to make it through the line of Americans and coalition troops standing between them and the outbound aircraft waiting on the runway. So when a suicide bombing went off at around 6:00 p.m. local time, the results were deadly.

“There were lots of very badly injured people hurt … lots of blood,” Desautels said in an Air Force news release on Monday. “The surgeons were worn out. Many died on the operating table.”

At least 169 Afghan civilians, 11 U.S. Marines, one Army soldier and one Navy corpsman were killed in the bombing and the gunfight that followed. Still, more may have died if not for the airmen in Desautels’ Personnel Recovery Task Force. An ad hoc group of more than 170 airmen charged with providing combat search and rescue for Operation Allies Refuge, the U.S. mission to evacuate its allies from Afghanistan as the Taliban conquered the country, the PRTF helped treat the wounded and evacuate them from the airport.

For example, among the task force were several pararescuemen (PJs), special operations airmen trained in search and rescue and combat medicine. A few PJs gave initial trauma care to 24 casualties, according to the Air Force, while five other PJs treated about 20 more casualties at the Marines’ Casualty Collection Point.

Beyond PJs, the PRTF also included pilots, loadmasters, special mission aviators, aircraft maintainers and support airmen who helped send out casualty evacuations on HH-60G Pave Hawk and CH-47 Chinook helicopters. Job titles aside, task force airmen also brought the level-headedness that comes from years of training and experience in preparation for a catastrophe like the suicide bombing at Abbey Gate.

“From day one, we did drills, exercises and primary, alternate, contingency and emergency plans for accountability,” said Desautels. In emergency settings, ‘accountability’ is basically like doing a head-count to make sure everyone under your command is accounted for.

“I was so proud of the [Personnel Recovery Task Force] to get full accountability within minutes,” said Desautels, who learned from previous deployments that “you can’t provide support without accountability.

“Once accounted for, I told them to find out where they could help,” he said.

Desautel’s airmen did what they could for the hundreds of victims of the attack, which was carried out by members of the Islamic State group. Still, that deadly day on Aug. 26 was only one moment in weeks of hard work that the task force performed to help treat and evacuate refugees during Allies Refuge.

“That whole thing was very high risk,” Desautels said. “Nobody else would move there, and we went. Pretty impressive.”

‘Not the Afghanistan we all knew’

Airmen knew going into Allies Refuge that it was not going to be like their previous visits to Afghanistan. Low supplies, no permanent base support and a deteriorating security situation meant that they would have to be more flexible and alert than ever before.

“The hair on the back of your necks should be standing up,” one airman said during an intelligence briefing in mid-July, according to the Air Force. “This is not the Afghanistan we all knew.”

Still, if anyone is flexible and alert, it’s the members of the Personnel Recovery Task Force. Their ranks include Guardian Angels: teams of airmen that specialize in search and rescue. Guardian Angel teams include the enlisted pararescuemen who find, treat and recover the wounded; the commissioned combat rescue officers who lead them; the Survival, Evasion, Resistance, and Escape specialists who can survive in any environment; and other airmen behind the scenes who make it all possible.

“By the time they walked out the door, I was 100 percent confident that the team was ready to execute their critical life-saving mission in the most challenging of environments,” said Col. Russell Cook, an HH-60 rescue pilot and commander of the Air Force’s 23rd Wing, the home unit of many of the members of the task force.

The mission did not disappoint. Because of the minimal security, even aircraft maintainers picked up weapons and put on armor before they patrolled the unit’s barracks, Desautels said. At one point on Aug. 15, Desautels had just worked 27 hours straight and was 90 minutes into his first wink of sleep “when he awoke to explosions and rapid gunfire,” the news release said.

The lieutenant colonel sprinted out of his barracks only to find his airmen scrambling to launch aircraft out of HKIA’s civilian terminal, which had been swarmed by thousands of Afghans. There was no telling if any of them were actually Taliban fighters intent on causing violence.

“I’ll never forget that feeling or sensation that we felt, like we were launching aircraft to save our lives,” Desautels said.

That was the day heart-breaking images were posted to social media of Air Force C-17s taking off down runways full of Afghan refugees trying to get on board. Some clung to the wheel chambers of the aircraft and fell to their deaths as the planes took off. With thousands of Afghans all over the airport, U.S and Norwegian medical providers nearly executed their “Alamo Plan,” where they would have holed up in “a safe and hardened structure,” according to the news release.

Instead, the medical providers kept treating people who needed help, but they needed guards to keep them safe. Pilots, maintainers and other airmen who normally don’t carry weapons picked up vests, helmets and M-4 rifles and got ready to fight.

“One of our captains was on the rooftop taking effective sniper fire,” Desautels said. “Every enemy combatant was taking every opportunity to incite more chaos in what was already a chaotic event.”

Three days later, the cavalry arrived in the form of Marines, National Guardsmen, and soldiers with the Army’s 82nd Airborne Division. But the added support didn’t stop Desautels and a few other airmen from crossing the runway under fire to see if HKIA’s civilian terminal could be opened back up.

“I crossed the runway with a small security detail, about 100 yards from the Taliban with gunfire going off,” he said. “I didn’t even think about it until later and how intense it was, and how close we were and unsecure and on the fringe.”

The news release did not say whether the terminal was opened up again, but in the meantime, airmen continued to treat and care for Afghan refugees. For example, PJs treated nearly two dozen patients hurt by the crowds and the August heat. In particular, one PJ carried four children to safety after their parents were trampled. Meanwhile, airmen outside the gates escorted American citizens, at-risk Afghans and other partners to the airport. One of those at-risk Afghans was among the first female Afghan Air Force pilots, along with her husband and toddler.

Even the homefront got involved. Veterans, contractors and former instructors of the 81st Fighter Squadron at Moody Air Force Base, Georgia knew many Afghan Air Force pilots and maintainers when they lived and trained there.

“They took photos of the wall of graduates to provide photos with names to the PRTF and Marines running security,” the news release said. “Community leaders and congressional staff members helped them successfully get U.S. visas.”

Other airmen helped Marines pull security, build shelters for Afghans, give out food and water, care for kids and soothe babies as they awaited evacuation flights. Not limited by Afghans alone, Desautels said he also helped coordinate security and flights to get 458 Pakistanis out of their embassy and evacuate 150 Ukrainians and Afghans out of the city.

“That’s what the men and women are doing that serve beside you,” Col. Chris Richardson, the commander of the 347th Rescue Group, said during an update at Moody’s command post the day after the suicide bombing. “They’re kicking ass.”

They kept kicking ass until the last American C-17 took off from HKIA on Aug. 30. Only then did Desautels send out the last two words of the deployment: “Mission complete.”

Operation Allies Refuge was the largest noncombat evacuation operation in U.S. history. Over the course of 17 days, the military evacuated about 124,000 people out of Afghanistan, which is probably the best possible illustration of the motto of the Air Force pararescue community: These things we do, that others may live.

“This deployment is probably a bigger life impact,” said Lt. Col. Maxwell Miller, director of operations for the 71st rescue squadron. “Marking the event is a significant event for the base, for the Air Force, and really for the military who have served in Afghanistan.”