The Lamest Hobby Led To This Lifesaving Bulletproof Shield

Being told that it’s a good idea to take cover when rounds start flying isn’t news to anyone, or at... 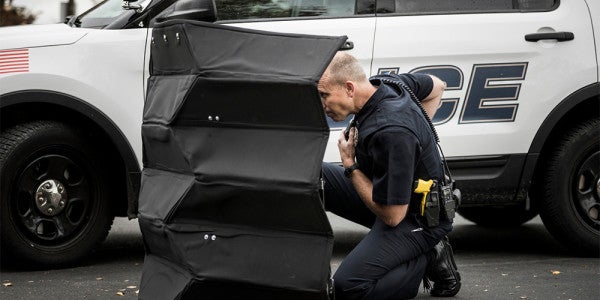 Being told that it’s a good idea to take cover when rounds start flying isn’t news to anyone, or at least it shouldn’t be. But being able to pop up a bulletproof wall wherever you are, then drop it down and carry it away by yourself when you’re done, that is new.

Created by a group of mechanical engineers at Brigham Young University in Utah, the shield is bulletproof, lightweight, and designed with law enforcement in mind, notes LikeCool. Unlike a typical ballistic shield that offers protection to just the wielder — unless you’re doing some Spartan phalanx-style shit — this can provide static cover for up to three people. The barrier is based off of an origami design called Yoshimura, and the creased pattern allows it to expand and envelop the user, providing protection to the sides as well as the front.

In testing, the barrier was able to stop incoming rounds from a 9 mm, .357 Magnum, and .44 Magnum pistols, according to a statement uploaded to the University’s YouTube channel. It’s made from 12 layers of kevlar and weighs in at 55 pounds, which may sound heavy, but it’s about half as light as other-steel based barriers that come close to 100 pounds.

It does make you wonder though: Did the engineers go through a bunch of other origami designs first? Is there a large bulletproof swan in a warehouse somewhere?