SOCOM Sets Its Sights On A 6.5 mm Round For New Sniper Rifle

For shooters, building an effective rifle begins with the bullet. That’s why Special Operations Command is calling for a new... 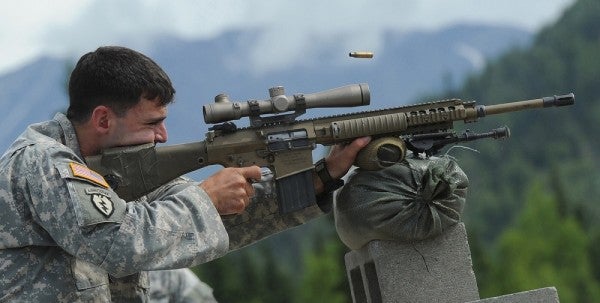 For shooters, building an effective rifle begins with the bullet. That’s why Special Operations Command is calling for a new caliber for its semi-automatic sniper rifles.

Still in the preliminary stages, SOCOM is considering a sniper rifle chambered in 6.5 mm and is testing two commercial rounds: the .260 Remington and the 6.5 mm Creedmoor, according to Military Times.

The 6.5 mm rounds will stay supersonic for longer, have less wind drift, and greater impact than 7.62 mm ammunition, SOCOM officials told Military Times. Additionally, SOCOM is looking into creating polymer ammo in 6.5mm in order to reduce the load. Doing so would shave off one-third of the weight, bringing a 6.5 mm complement close to the weight range of 5.56 mm ammo.

Related: The Corps Mulls Changes To Sniper School So More Marines Can Pass »

The organization is deliberately focusing on readily available and popular ammunition, looking into the drawbacks and benefits of each, Maj. Aron Hauquitz told Military Times.

“We're purely in the exploratory phase,” Hauquitz said. “We're trying to see if we can take a weapon that is 7.62 and give it greater range, accuracy and lethality.”

The decision to look into 6.55 ammunition came out of preliminary results from the Small Arms Ammunition Configuration study, which looks at commercially available ammo, as well as new technology.

While the ammo and rifle are being developed alongside each other, the project is still in its research phase, with no clear date on when a new rifle will be in operator’s hands, but they’ll have a better idea of caliber size later this year, according to Military Times.