'Marines run to the sound of the guns, so it didn’t surprise me at all that the Marines were there' 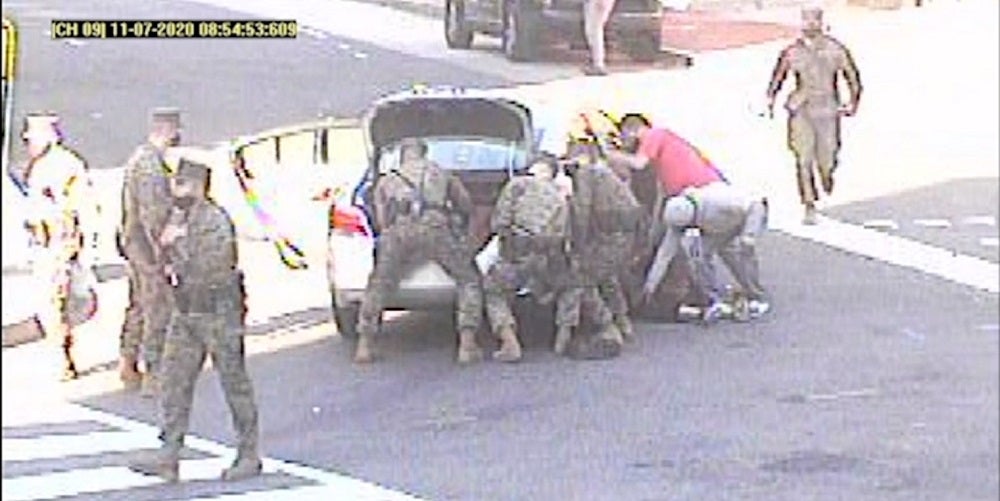 Whenever an emergency arises, people in danger have no better friends than motivated Marines.

Such was the case when a woman on a scooter was struck by a car recently near Marine Barracks Washington, D.C.

With the woman pinned under the car, Marines with Guard Company quickly had to come up with a plan to free her, according to a video about the Nov. 7 event posted by the Defense Visual Information Distribution Service.

Cpl. Denny Bohne and Staff Sgt. Jeffrey Belko quickly realized that they needed to find a way to raise the car so that the woman could be pulled to safety.

Bohne said he and another Marine opened the car’s trunk and found a jack.

“As soon as I grabbed the tire iron, I started jacking the car up from the rear, and Staff Sgt. Belko proceeds to run over to a civilian’s car, grab their jack from their vehicle, and then start jacking up the front of the car,” Bohne said in the video.

Their actions significantly cut down the time it took for emergency responders to pull the woman from underneath the car and start treating her, said Washington, D.C., firefighter Lt. Leo Ruiz, of Engine 18.

“Honestly: If they hadn’t done what they had done, it could have delayed care for that patient,” Ruiz said in the video.

With the help of the Marines and others on the scene, the woman survived.

Belko noted that a lot of people came together to make sure the woman was freed and treated as quickly as possible.

“Marines run to the sound of the guns, so it didn’t surprise me at all that the Marines were there,” Belko said.

Related: Marine Who Rushed Into Burning Building: We Came to Help Our Neighbors