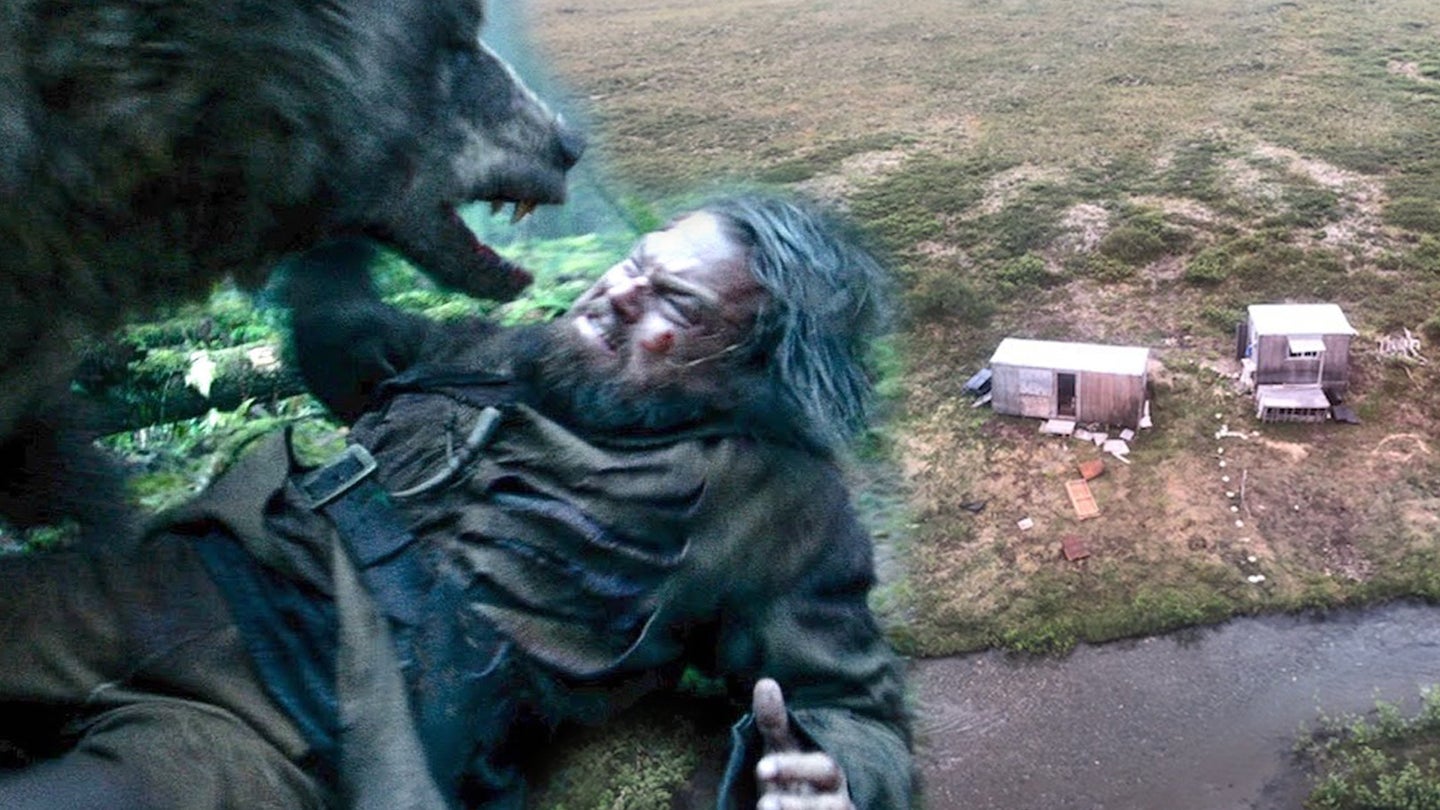 Left, a screenshot from the film "Revenant," right, a photo of the mining camp in Nome, Alaska, where a man was rescued after being harassed by a bear for days on end. (Revenant/U.S. Coast Guard).
SHARE

Getting attacked by a bear is one thing. Getting attacked by the same bear repeatedly, however, is the stuff of both nightmares and films starring Leonardo DiCaprio. This was the experience of one unidentified man at a mining camp in Alaska before the Coast Guard rescued him last week, according to a news release from the service.

On Friday, a Coast Guard MH-60 Jayhawk helicopter aircrew, operating out of Coast Guard Air Station Kodiak, was en route to a training mission when they spotted an S.O.S sign on top of a shack roughly 40 miles outside the city of Nome, Alaska, the New York Times reported.

The aircrew quickly landed and made contact with the man, who “requested medical care after being attacked by a bear a few days earlier,” according to the Coast Guard release. “The man reported that the bear had returned to his camp and harassed him every night for a week straight.”

According to the service, the man appeared to have suffered bruising to his torso and a non-life-threatening leg injury during the encounter.

“At some point, a bear had dragged him down to the river,” Coast Guard Lt. Cmdr. Jared Carbajal, one of the pilots of the helicopter, told the Times. “He had a pistol. He said that the bear kept coming back every night and he hadn’t slept in a few days.”

“He only had two rounds left,” Coast Guard spokeswoman Petty Officer First Class Ali Blackburn told The Times. “I’d imagine you’d be a little loopy after not sleeping for so long.”

Bear attacks are obviously no joke in Alaska. According to a 2019 report by published by the state, 68 people were hospitalized for injuries sustained during bear attacks between 2000 and 2017, with ten people dying as a result of their injuries. Two soldiers at Joint Base Elmendorf-Richardson were mauled by bears in two separate incidents in the same summer a few years back.

Still, it’s hard to read the Coast Guard’s accounting of the rescue and not immediately think of the 2017 epic film The Revenant, which saw Leonardo DiCaprio endure an intense run-in with a CGI bear:

Luckily, this incident turned out significantly better for the unnamed man in Alaska, even if it was clearly a harrowing one.

“He was kind of struggling. When we came around, he was on his hands and knees waving a white flag,” Lt. j.g. A.J. Hammac, the co-pilot of the Coast Guard helo, told the New York Times. “He definitely looked like he had been out there for a while.”

Mark my words: those bears are up to something, and the military better be ready to deal with them in the long term — or else.