'They do not know what kind of threat we're suffering.' 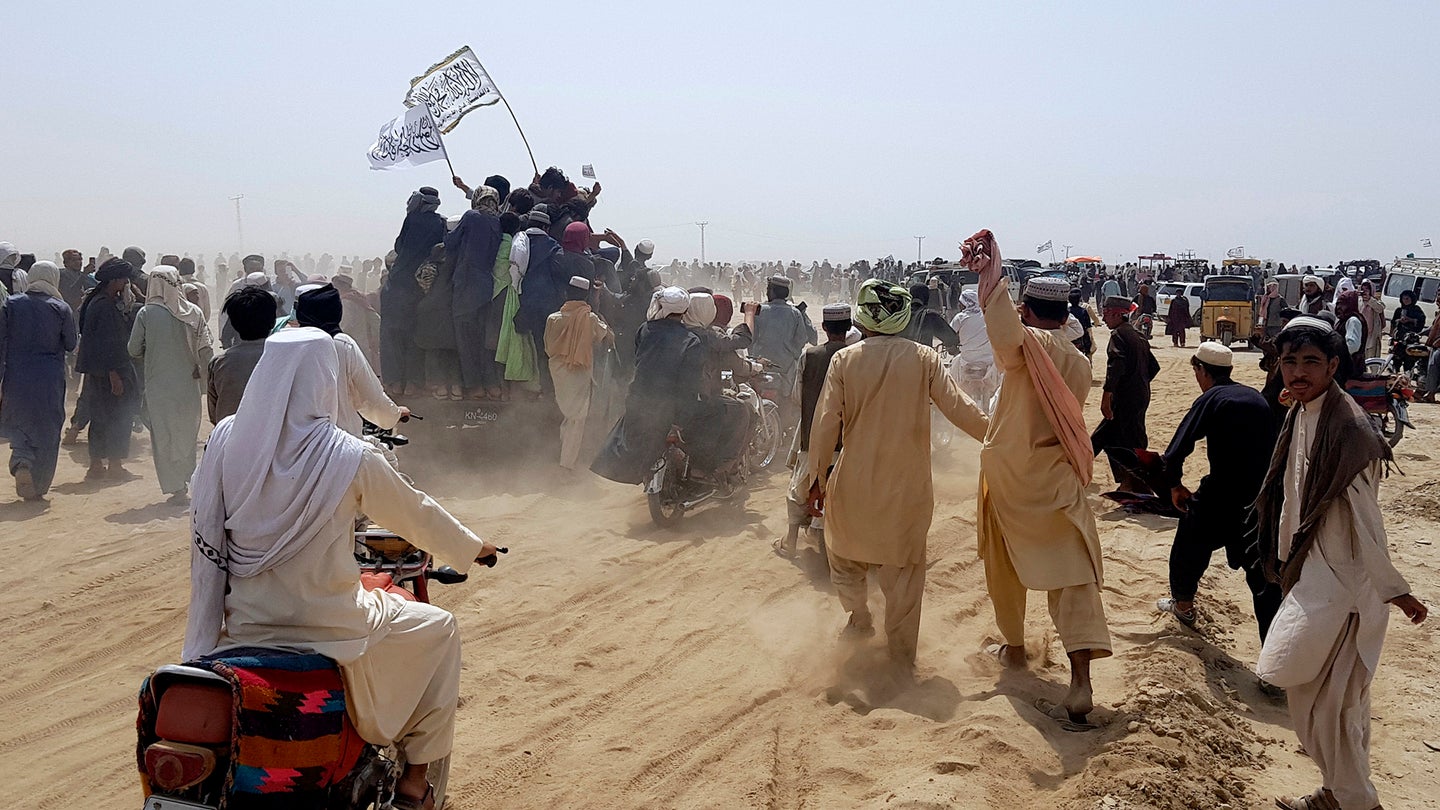 Supporters of the Taliban carry the Taliban's signature white flags in the Afghan-Pakistan border town of Chaman, Pakistan, Wednesday, July 14, 2021. The Taliban are pressing on with their surge in Afghanistan, saying Wednesday that they seized Spin Boldaka, a strategic border crossing with Pakistan, the latest in a series of key border post to come under their control in recent weeks. (AP Photo/Tariq Achkzai)
SHARE

Former Afghan interpreter Mirza Sayeed Nayab’s life is in danger because of a clerical error on his application for a Special Immigrant Visa.

Nayab, who worked with U.S. troops in Afghanistan for four years, claims he initially applied for a visa in 2014, but he was denied because his supervisor with DynCorp, a private military contractor, failed to put the date and time next to his signature on the required letter of recommendation.

By that time, his former supervisor, Richard F. Castrati, had left DynCorp, so Nayab no longer had any contact information for him. After trying unsuccessfully to track the man down for two years, Nayab resubmitted his visa application in 2016, only to run into the same problem: His application was rejected by the State Department because an arguably irrelevant piece of information — the date his supervisor signed the document — was missing.

Now, he might die at the hands of the Taliban because the U.S. government is obsessed with paperwork.

He provided Task & Purpose with a copy of the letter written by his supervisor. Although it contains typographical and spelling errors, it is in the same format as other letters of recommendation for Afghan interpreters.

Task & Purpose unsuccessfully tried to contact Nayab’s former supervisor on his behalf but the number provided on his paperwork is no longer functioning. A search of public records indicated the man had worked for DynCorp from 2005 to 2012.

Nayab is one of an untold number of Afghans who have worked for the United States but are not eligible to be evacuated because they aren’t in the application pipeline for Special Immigrant Visas.

Since President Joe Biden announced in April that most U.S. troops would leave Afghanistan this year, Task & Purpose has been contacted by a small number of former interpreters who are trying to get out of the country.

When asked if anyone at the Defense Department can help these Afghans, Pentagon spokesman John Kirby on Wednesday said they need to contact the State Department.

“In particular our embassy in Kabul, which takes care of consular issues,” Kirby said. “That’s the best and most appropriate place for you to refer them to.”

But Nayab said he has already reached out to the U.S. embassy in Kabul to explain why the date and time are not on the letter of recommendation and no one has responded to him over the past five years.

“I have [messaged] many times but they didn’t solve the problem,” Nayab said.  “Unfortunately they do not know what kind of threat we’re suffering.”

Nayab’s situation is not unique. Former Army Capt. Sayre Payne said the embassy in Kabul was not much help when he contacted them recently about his former interpreter, who has also had paperwork issues with his visa application.

Payne said the interpreter, whom he asked Task & Purpose not to identify for security reasons, is a “dead man walking” because the Taliban posted a death notice on his door and then burned down his house.

Even though Payne initially wrote the Afghan man’s letter of recommendation in 2014, the interpreter is now at the very beginning of the visa application process, and that means it could take years to be approved.

When Payne contacted the embassy in Kabul, he received an email saying it could not offer asylum to Afghan citizens and “there is no mechanism to expedite or ‘fast-track’ the SIV process.”

A State Department spokesperson was unable to speak about the specific issues raised by Nayab and Payne because visa records are confidential under U.S. law.

The U.S. embassy in Kabul is accelerating the Special Immigrant Visa application process, said the spokesperson, who added that the embassy issued 299 such visas in March, 356 in April, and 619 in May.

But even that increase in issued visas accounts for just a small portion of those people hoping  to be evacuated. Roughly 18,000 Afghans have applied for Special Immigrant Visas, but when you include their family members, the number of people in need of rescue is as many as 70,000.

The Taliban has gone on the offensive since the U.S. government announced the troop withdrawal in February 2020. In the past two months alone, the Taliban have captured Afghan districts with lightning speed and now the Kabul government only controls about 20% of the country.

With the Taliban poised to achieve a total victory, the U.S. government expects to begin flying Afghans who have applied for visas along with their families to safety at the end of the month. Some of those Afghans could be hosted on military bases in the United States, Kirby said at Wednesday’s Pentagon briefing.

None of this any help to Nayab, whose visa application remains in limbo. Every day that Nayab remains in Afghanistan he remains at risk because the Taliban are tracking down Afghans who worked for the United States and finding documents showing who worked as translators, he said.

“After that, terrorist groups know how to deal [with] their enemies,” Nayab said.