In the wake of escalating violence in Iraq, the resignation of the country's prime minister may be imminent, Task & Purpose has learned. 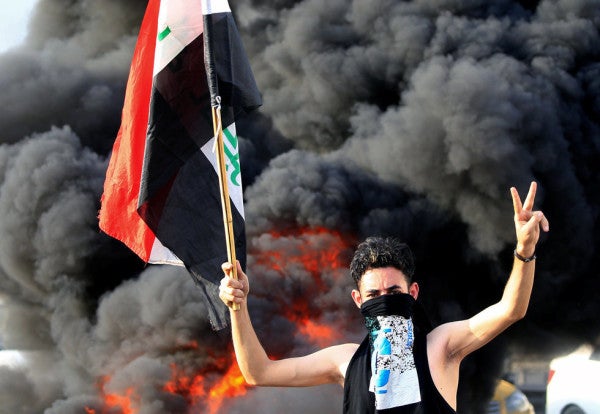 In the wake of escalating civil unrest and a wave of violent protests across Iraq, the American ambassador to the country has warned that the resignation of the prime minister may be imminent, Task & Purpose has learned.

Matthew Tueller, a career diplomat who took over the Baghdad mission in June, told U.S. military leaders on Saturday morning that it “appears inevitable” that Prime Minister Adil Abdul-Mahdi would resign in the face of deadly protests and a call from one of the country's most powerful clerics that the government resign and hold new elections under U.N. supervision.

“Through this move, we assess [Moqtada al-Sadr] is seeking to take advantage of this crisis by giving demonstrators a dramatic response to their anger against the government and strengthening his own hand,” Tueller wrote in a classified email sent to U.S. military leaders on Saturday morning.

“Subsequently former PM [Haider al-Abadi] also issued a call for early elections. With these drastic developments the resignation of [Adil Abdul-Mahdi] by as early as today appears inevitable and Iraq's government will enter unchartered and fraught political territory.”

“It is unclear if these moves will slow down the protests or accompanying violence,” Tueller concluded.

However, U.S. military leaders in the region remain skeptical of whether Abdul-Mahdi will actually resign or give in to protester's demands, an American military official told Task & Purpose on condition of anonymity in order to discuss sensitive matters.

Tens of thousands of Iraqis have flooded the streets of Baghdad and elsewhere across the country over the past week to protest government corruption, widespread unemployment, and a lack of basic services and infrastructure, The New York Times reported on Saturday.

Iraqi security forces have responded to the protests with force, leaving more than 100 people dead and injuring as many as 6,000.

Abdul-Mahdi, who has been in office for less than a year, had pledged that he would fix unemployment and combat rampant government corruption, but has yet to make good on those promises, The Washington Post reported Friday.

“Mahdi's resignation may not be enough,” Jennifer Cafarella, research director with The Institute for the Study of War, told Task & Purpose. “Muqtada al Sadr has called for the resignation of the entire council of representatives and some of the protesters have gone even farther and called for a complete overthrow of the government.”

However, Cafarella cautioned that a changing of the guard would not fix the underlying problems that prompted the protests, and the government's heavy-handed response may backfire.

“It is possible that the combination of this concession and rising levels of targeted killings of protesters will decrease the protests,” Cafarella said. “Mehdi's resignation would do nothing to fix the underlying and systemic problems that have triggered these protests, however. Furthermore, there remains a dangerous possibility that the violence provokes protesters to begin arming rather than staying home.”

The Iraqi government has responded to unrest by enacting a curfew — which was reportedly lifted on Saturday, according to the New York Times. An internet blackout was temporarily lifted when Abdul-Mahdi gave a speech on Friday, in which he referred to the curfew as “bitter medicine,” and claimed security forces were adhering to “international standards.”

Meanwhile, Grand Ayatollah Ali Sistani, an influential Shiite cleric, urged the government on Friday to implement reforms and called for an end to the violence before it was “too late,” the Washington Post reported.

When asked for comment from Task & Purpose, a State Department spokesperson who declined to be named said “this is an internal matter for the Iraqi people to decide.”

“The United States has a strong partnership with Iraq,” the official said. “We support its sovereignty and constitutional processes. We continue to monitor the situation closely. We have already called publicly for an end to the violence on all sides.”

The Iraqi Embassy in Washington declined to comment on the record.