Anyone with information about this missing cadet is asked to call the West Point Military Police at 845-938-3333. 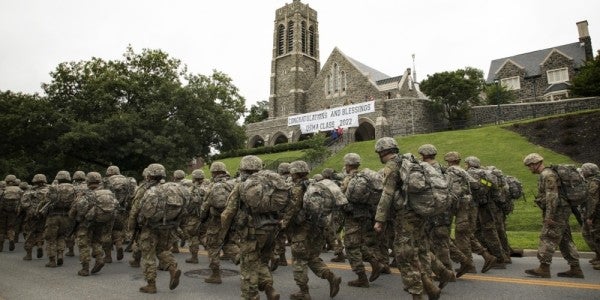 Search efforts are underway to find a West Point cadet, who has gone missing along with his M4 carbine, the U.S. Military Academy announced on Sunday.

“There is no indication the Cadet poses a threat to the public, but he may be a danger to himself,” a West Point news release says.

Academy officials do not believe the missing cadet has access to any magazines or ammunition, according to the news release, which did not identify the cadet, who is a member of the Class of 2021.

“West Point is operating under normal conditions with an increased force protection status,” the news release says. “We have increased Military Police patrols at sporting events and across the Academy as a precautionary measure and to assist in safely locating the missing cadet.”

The missing cadet was last seen about 5:30 p.m. on West Point grounds and was supposed to take part in the academy's military skills competition over the weekend, the news release says. When the cadet did not show up for the initial road march for the competition, his teammates began looking for him.

Military police began searching for the cadet around 1 a.m. on Saturday, followed by New York State Police, and the Coast Guard, the news release says.

Officials contacted Keller Army Community hospital and local emergency rooms off-base to confirm that the missing cadet was not being treated there.

“I want to thank the local and state law enforcement agencies and emergency services for their tireless support,” Lt. Gen. Darryl Williams, superintendent of West Point, said in a statement. “We will continue to search with all means possible, on and off West Point. Safely locating the Cadet remains our focus and number one priority.”

Anyone with information about this missing cadet is asked to call the West Point Military Police at 845-938-3333.