After being sent home over COVID-19 fears, West Point cadets are returning to campus for Trump’s graduation speech 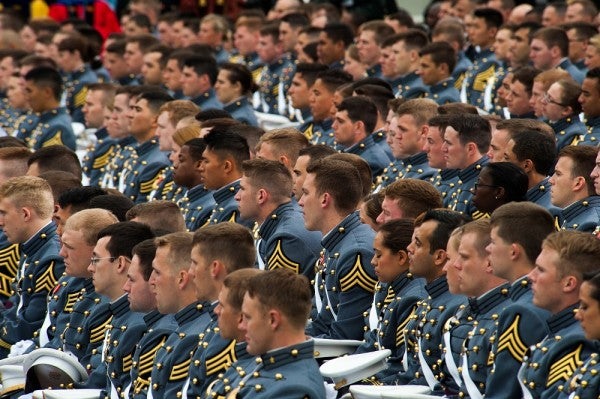 The U.S. Military Academy in West Point, New York is bringing 1,000 cadets back on campus for a June graduation ceremony in which President Trump plans to address the new officers, who are currently scattered throughout the country after being sent home due to novel coronavirus (COVID-19) fears.

“We are honored to host the commander in chief as we celebrate the many accomplishments of our graduating class,” Lt. Gen. Darryl A. Williams, the superintendent of the academy, said in statement. “West Point continues to receive tremendous support from Army leadership throughout this process, and the academy looks forward to welcoming the newest cohort of lieutenants into the ranks of the Army Officer Corps.”

It remains unclear how the graduation ceremony will actually look. The Naval Academy decided against holding an in-person ceremony at its campus in Annapolis, Md., and opted to hold a virtual event instead, according to The New York Times. The Air Force Academy in Colorado Springs, Colo. held a ceremony with cadets sitting eight feet apart from each other, with Vice President Mike Pence as its commencement speaker.

Three sources told The Times that West Point still hadn't made its decision on how to conduct the ceremony, originally planned for late May, when Trump surprised officials there by saying he would speak in person.

“I understand they’ll have distancing,” Trump said on April 17. “They’ll have some big distance, so it will be very different than it ever looked. Do I like the look? No, I don’t. And eventually, next year, they’ll have a commencement like it’s been.”

West Point, located on the Hudson River about 90 minutes from New York City, said on its website that the June 13 ceremony will “look different from recent graduation ceremonies” because of health concerns without providing further details. Decisions on whether families would be allowed to attend have not yet been made, it said, though officials would ensure a “broadcast of the ceremony is available for viewing.”

The academy has been under a public health emergency since late March. In an interview with The Times, Gen. Williams said returning seniors would be tested off-campus for the virus, with those testing negative being able to return to school and monitored for 14 days before the president's remarks.

“All 1,000 of them will not intermix,” Williams told The Times. “They’ll be in their rooms. They’ll have their masks on. Groups will be segregated in the mess hall when they eat.”

New York has been the state hardest hit by the coronavirus. The state now represents nearly 30% of the 924,576 total confirmed cases in the United States. More than 16,000 New Yorkers have died.