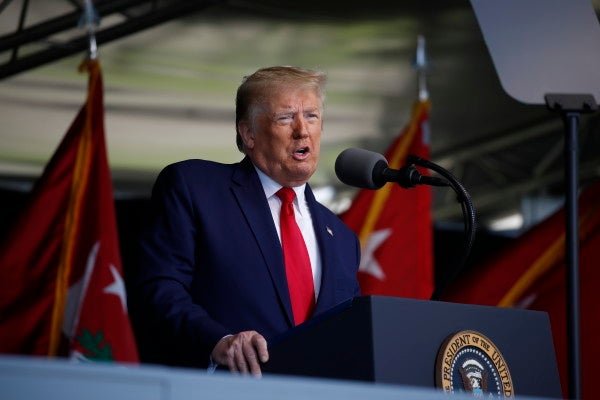 President Donald Trump delivered a message of unity to graduating West Point cadets and the nation amid growing concerns of civil-military relations in the United States.

Speaking at the graduation of 1,110 new officers from the U.S. Military Academy at West Point in upstate New York on Saturday, Trump emphasized America's core values and the immutable role of the U.S. military in preserving the integrity of the country in a remarkably on-script address.

“You have come from the farms and the cities, from states big and small, and from every race, religion, color, and creed,” Trump said in prepared remarks, which were released by the White House before his address. “But when you entered these grounds, you became part of one team and one family, proudly serving one American nation.”

“You became brothers and sisters pledging allegiance to the same timeless principles, joined together in a common mission: to protect our country, to defend our people, and to carry on the traditions of freedom, equality and liberty that so many gave their lives to secure,” Trump said, adding that the graduates “exemplify the power of shared national purpose to transcend all differences and achieve true unity.”

“Today, you graduate as one class, and you embody one noble creed: duty, honor, country,” he added.

Trump's remarks came amid rising tensions between the White House and Pentagon over the president's response to the nationwide protests over the death of George Floyd, an unarmed African American man, at the hands of white Minneapolis police officer on May 25.

“What has historically made America unique is the durability of its institutions against the passions and prejudices of the moment,” Trump said in an apparent allusion to the protests. “When times are turbulent, when the road is rough, what matters most is that which is permanent, timeless, enduring and eternal.”

Trump had threatened multiple times amid the unrest to invoke the Insurrection Act of 1807 and deploy active-duty U.S. troops to American cities to quell the protests and restore “law and order,” a proposition that Defense Secretary Mark Esper summarily rejected.

“I say this not only as secretary of defense but also as a former soldier and a former member of the National Guard: The option to use active-duty forces in a law enforcement role should only be used as a matter of last resort – and only in the most urgent and dire of situations,” Esper said at a Pentagon news conference on June 3. “We are not in one of those situations now. I do not support invoking the Insurrection Act.”

The tension between the White House and military had reached a head just days earlier on June 1 when Esper and Chairman of the Joint Chiefs of Staff Gen. Mark Milley joined Trump during a surprise photo op at the historic Saint John’s Church in Washington, D.C. after law enforcement used tear gas and rubber bullets to disperse mostly peaceful protester.

Milley said that he had made a mistake by joining Trump that day, stating that he “should not have been there” during a prerecorded video commencement address to the National Defense University on Thursday.

“My presence in that moment and in that environment created a perception of the military involved in domestic politics,” Milley said.

Esper is reportedly on 'shaky ground' with the White House over his public break with Trump, as CNN put it, while Milley reportedly considered resigning over the blowback stemming from his role in Trump's photo op.