Legal challenges are one thing, but Trump is clearly desperate to deploy the military to satisfy his own ends. 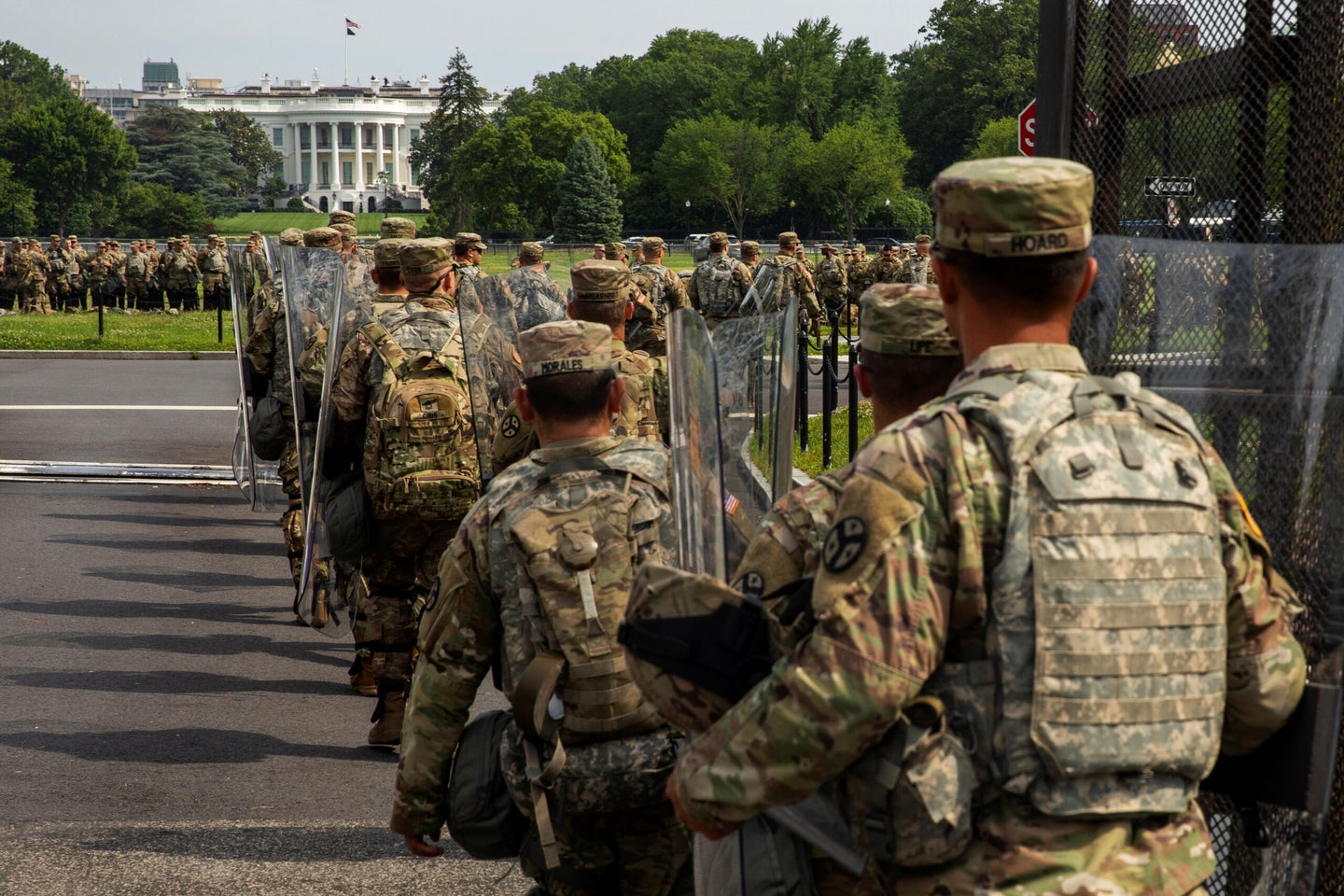 Some dangerous ideas about the role of the U.S. military in American civil society are finding an audience in President Donald Trump.

Both the New York Times and Axios report that the president on Friday welcomed retired Army Lt. Gen. Michael Flynn, Trump’s pardoned former national security adviser, to a meeting that, at one point, touched on the prospect of potentially using the military to somehow overturn the results of the 2020 presidential election that former Vice President Joe Biden decisively won.

The meeting came just days after Flynn appeared on the far-right news channel Newsmax to declare that Trump, in his role as commander-in-chief, could “take military capabilities, and he could place them in those [swing states], and basically re-run an election in each of those states.”

“These people out there talking about martial law like it’s something that we’ve never done. Martial law has been instituted 64 — 64 — times,” Flynn said. “So, I’m not calling for that, we have a Constitutional process … that has to be followed.”

According to New York Times reporter Maggie Haberman, Trump on Friday “asked about Flynn’s suggestion of deploying the military, those briefed said,” only for the idea to be shot down by White House Chief of Staff Mark Meadows and White House Counsel Pat Cipollone.

Other topics discussed at the meeting included “an executive order to commandeer voting machines … and the specter of Sidney Powell, the conspiracy-spewing election lawyer, obtaining governmental power and a top-level security clearance,” according to Axios.

That Trump welcomed a noted conspiracy theorist like Flynn into his inner circle to discuss somehow overturning the results of the 2020 election is one thing. To actually ask about the prospect of deploying the military to “re-run” the elections themselves is another thing entirely.

“The fact that Mike Flynn continues to spread conspiracy theories and misrepresent the president’s legal authorities is a disgrace to the country and to the uniform he wore,” Jim Golby, a senior fellow at the Clements Center for National Security at the University of Texas-Austin, told Task & Purpose.

“Trump has tried to use the military for electoral benefit before — deploying troops to the border before the Congressional midterms and threatening to use the Insurrection Act this summer,” Golby said, referring to Trump-fed rumors of a ‘migrant caravan’ approaching America’s borders in late 2018. “But discussing these conspiracies in the Oval Office crosses a new line.”

Indeed, Trump’s push comes at a precarious (if not somewhat ridiculous) moment for civil-military affairs in the United States, one that’s been building since the president floated the prospect of invoking the Insurrection Act of 1807 to quell nationwide protests this summer.

The idea that Trump might exploit the centuries-old law and send U.S. troops into American streets, combined with the president’s vocal refusal to commit to a peaceful transfer of power in the run-up to the 2020 election, had previously induced the Defense Department to reiterate its apolitical role in American elections.

“I believe deeply in the principle of an apolitical U.S. military,” Chairman of the Joint Chiefs of Staff Gen. Mark A. Milley said in September. “In the event of a dispute over some aspect of the elections, by law, U.S. courts and the U.S. Congress are required to resolve any disputes, not the U.S. military. I foresee no role for the U.S. armed forces in this process.”

Related: We need to stop talking about a possible US military coup

But Flynn’s calls for not-quite martial law also come amid a post-election reshuffling at the Pentagon — starting with the unceremonious departure Defense Secretary Mark Esper following his summertime break with Trump over the Insurrection Act — and the installation of pro-Trump loyalists there that has raised the specter of a military coup once more despite overwhelming evidence that the U.S. military would never be party to such a thing.

“Normally, retired military officers do not call on the president to throw out the Constitution and install a military junta to ensure that votes are counted in a way that guarantees the incumbent’s re-election,” as my colleague Jeff Schogol recently wrote. “But this is 2020: we’re one tweet away from soccer stadiums being used to hold political prisoners.”

All of this puts a tremendous strain on civil-military relations, one that, as Schogol notes, will give the incoming Biden administration even more reasons to mistrust the U.S. military when the transition formally comes to a conclusion on Jan. 20. And luckily, the norms are holding: On Friday, Army Secretary Ryan McCarthy and Chief of Staff Gen. James McConville reiterated in a joint statement that there “is no role for the U.S. military in determining the outcome of an American election.”

But the very fact that Trump welcomed Flynn into the White House and seriously entertained the prospect of military action should be alarming to both senior government officials and to average voters living at home. Legal challenges are one thing, but Trump is either desperate to deploy the military to satisfy his own ends or simply trying to see how far America will let him go — and it’s up to the military leaders to hold strong against those autocratic impulses, no matter what.

“The military won’t follow illegal orders and Trump won’t invoke martial law, but Trump even considering these crazy ideas legitimizes them and will increase calls for military involvement in elections,” as Golby told Task & Purpose. “That damage will last after Trump is gone and pressure for the military to play a bigger role in politics will continue to grow.”