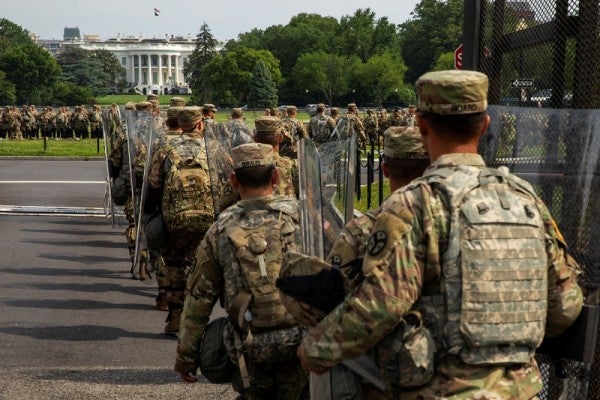 For the love of God, people: We need to stop all nonsense speculation that the U.S. military could somehow be involved in removing President Donald Trump from office.

Paul Yingling and John Nagl, two respected former Army officers, recently called on Army Gen. Mark Milley, the chairman of the Joint Chiefs of Staff, to order U.S. troops to sweep aside Trump’s Praetorian Guard of “little green men” and escort the president out of the White House should Trump refuse to accept a loss at the ballot box.

“Throughout our history, Americans have laid down their lives so that this form of government may endure,” Yingling and Nagl wrote in a commentary for Defense One. “Continuing the unfinished work for which these heroes fell now falls to you.”

To Defense One’s credit, it immediately published a counter-argument by Kori Schake and Jim Golby that even suggesting Milley should remove a sitting president is “deeply irresponsible” and does harm to the American public’s trust in the military.

But the damage had been done because the notion that the military could play a role in the election has made it into the news cycle with CNN airing a segment on Aug. 14 about why such a military intervention would be a bad idea.

The issue also came up at an Aug. 13 Pentagon news conference when Defense Department spokesman Jonathan Hoffman was asked if the military was prepared if called upon to assist civil authorities in quelling any civil unrest following the presidential election.

“I would just say we have a Constitution and our Constitution, which all members of the military have sworn an oath to, provides no role for the U.S. military as arbiter of political or election disputes,” Hoffman said. “This issue appears to be borne of unserious thought reflecting a fundamental lack of appreciation for the history of our Democracy and the civilian-military relationship established under our Constitution.”

Yet both Nagl and Yingling both understand the military very well. Nagl helped write the Army and Marine Corps’ counterinsurgency manual in 2006 and Yingling wrote a 2007 article in Armed Forces Journal arguing that the U.S. military’s generals repeated the mistakes made in Vietnam during the Iraq war.

Moreover, it’s not just these two military experts who have raised the possibility of the military playing a role in the coming election. Former Vice President Joe Biden, the presumptive Democratic presidential candidate in November, has even suggested the service chiefs would remove Trump from the White House if the president refused to concede defeat.

Five years ago, conspiracy theorists claimed that U.S. Special Forces planned to invade Texas under the guise of a military exercise. While the story got plenty of play in the media and some politicians used it for their own ends, the conspiracy theorists were widely viewed as a fringe group.

But it goes without saying that we are not currently living in normal times and Trump has repeatedly talked about staying in office beyond the eight year limit mandated by the 22nd Amendment. In 2018, Trump praised Chinese leader Xi Jinping after the communist party allowed Xi to serve as president for life. Trump then added, “Maybe we’ll have to give that a shot someday.” The following year, Trump suggested that he might still be in office for another 10 to 14 years.

Meanwhile, the president has gone to war with the U.S. Postal Service to limit mail-in voting amid the ongoing novel coronavirus (COVID-19) pandemic. With fewer polling stations available in some states, voters could have to wait in line for hours to cast their ballots, running the risk of getting sick.

But Trump has consistently claimed without evidence that allowing people to vote by mail in the upcoming election would result in massive voter fraud, even though service members and their families vote by mail in each election. Most recently, the president has said he is blocking a COVID-19 relief bill because it includes money to help voters submit their ballots by mail.

The Defense One commentary by Yingling and Nagl represents a “primal scream” in response to the president’s rhetoric about staying in office longer than the Constitution allows, said Peter Feaver, a political science professor at Duke University in North Carolina.

“If the president would speak more responsibly about it, that would calm things down tremendously,” Feaver said.

Another reason why some of Trump’s opponents are raising the specter of using troops to depose the president is that for several decades the U.S. government has reflexively called on the military to handle any emergency “whether or not it’s squarely in the military wheelhouse or not.”

With all of that said, all talk about using the military to launch a regime change in Washington needs to cease. U.S. troops successfully overthrew Saddam Hussein and – initially – the Taliban in Afghanistan. How well did that work out in the end?

Anyone calling for a military coup to oust the president has not lived through an actual coup. Aug. 14 marks exactly seven years since my good friend was nearly killed by Egypt’s military government during its massacre of more than 800 protesters.

The United States has remained a democracy during the Civil War and two World Wars. Find me another country that can boast more than 240 years of civilian rule!