Trump says voting by mail is bad. US troops do it all the time

More than two-thirds of service members who voted in the 2018 elections submitted an absentee ballot. 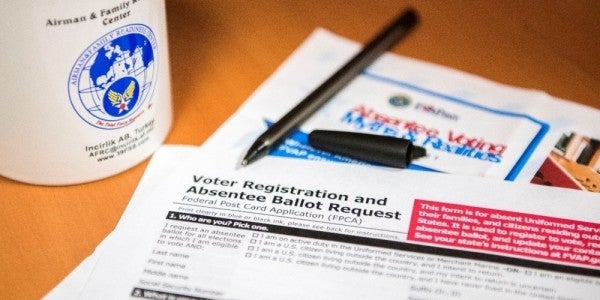 Despite the fact that most service members and their families cast their ballots by mail during every election, President Donald Trump feels that voting by mail poses a threat to holding fair elections in November.

On Wednesday, Trump tweeted that Republicans should oppose efforts by the Democrats to allow for statewide voting in light of the novel coronavirus pandemic. In Wisconsin, voters waited for hours in rain and hail to vote in Tuesday’s primary election after the Supreme Court refused to allow state residents to vote by mail in order to avoid getting sick.

The president argued that if states allow voters to submit their ballots by mail, it would create a “tremendous potential for voter fraud” and would also work against Republicans, Trump tweeted on Wednesday.

Republicans should fight very hard when it comes to state wide mail-in voting. Democrats are clamoring for it. Tremendous potential for voter fraud, and for whatever reason, doesn’t work out well for Republicans. @foxandfriends

However, more than two-thirds of service members who voted in the 2018 elections submitted an absentee ballot, said Meghan Kelly, state legislative affairs specialist for the Federal Voting Assistance Program.

About 75% of the 1.3 million active-duty service members are eligible to vote absentee under the Uniformed and Overseas Citizens Absentee Voting Act because they are stationed away from their voting residence, Kelly said in a statement to Task & Purpose.

Former Defense Secretary Chuck Hagel said he never saw evidence of fraud in the military’s voting system when he served in the Army or later when he became a senator.

“The first time I ever voted in my life was I voted by absentee mail from Vietnam in November of 1968,” Hagel told Task & Purpose on Wednesday. “I voted while sitting on top of a tank in Vietnam. A lot of guys that I knew in Vietnam were old enough to vote and voted by absentee ballot. I never heard of any problems. I never heard about any issues or anybody charging there was fraud, waste, or abuse in any process that involves voting absentee by mail.”

Hagel remembers that he cast his ballot for Richard M. Nixon – who later wrote Trump a 1987 letter encouraging him to run for office.

Retired Air Force Gen. Michael Hayden, who led both the Central Intelligence Agency and National Security Agency, tweeted that he voted by mail for 40 years.

Moreover, the president himself acknowledged on Tuesday that he had voted by mail in last month’s Florida primary election. He argued he was allowed to vote absentee because he was out of the state.

“No, I think that mail-in voting is a terrible thing,” the president told reporters during a White House news conference. “I think if you vote, you should go.”

Reporter: "But you voted by mail in Florida's election last month, didn't you?"

Trump: "Sure, I can vote by mail through the –"

Reporter: "So how do you reconcile that?"

Trump: "Because I'm allowed to." pic.twitter.com/NAOi5NCa6S

But Retired Army Gen. Barry McCaffrey pointed out that states rely on volunteer poll workers for in-person voting, and these volunteers tend to be elderly – exactly the demographic that is most at risk of getting the coronavirus.

Meanwhile, states can check for voter fraud by seeing if hundreds of people with the exact same home address are trying to cast separate ballots, McCaffrey told Task & Purpose on Wednesday.

“Obviously, the armed forces deserve to vote and we routinely in every state get absentee ballots,” McCaffrey said.

“So the hypocrisy of the president’s position is utterly mind-boggling. It’s like Bizarro Land to stand up there and say: I’m voting by mail from the White House; I’m too important to risk my health to go to Florida.”