"We have counseled the member responsible, and have provided remedial training to ensure no further missteps occur in the future" 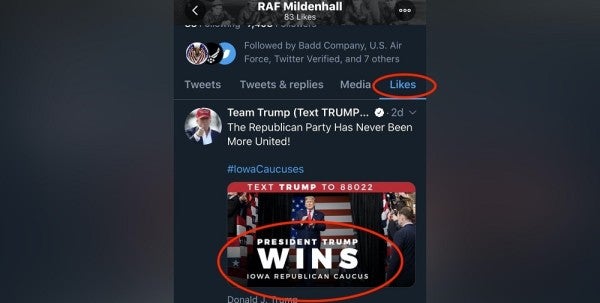 The 100th Air Refueling Wing has taken “immediate corrective action” after its official Twitter page for RAF Mildenhall in the United Kingdom “liked” a tweet from President Donald Trump's re-election campaign and another tweet from the president himself attacking one of his political rivals, a spokeswoman said.

“This behavior is not representative of RAF Mildenhall, the U.S .Air Force, or the standards to which we hold our airmen,” Capt. Lauren Ott told Task & Purpose. “We have counseled the member responsible, and have provided remedial training to ensure no further missteps occur in the future.”

A Twitter user posted screenshots on Thursday of the two tweets in question. The first one the president's campaign read, “”The Republican Party Has Never Been More United!”

In the second tweet, Trump took aim at Sen. Bernie Sanders (D-VT.), who is vying for his party's nomination to run against the president in the general election November.

“Wow! Crazy Bernie Sanders is surging in the polls, looking very good against his opponents in the Do Nothing Party,” Trump tweeted on Jan. 12. “So what does this all mean? Stay tuned.”

The Twitter account is run by airmen from the 100th Air Refueling Wing public affairs office, Ott said on Friday.

“Any tweets that were considered contrary to DoD guidance have been un-liked,” she said.

Ott said that all military and civilian personnel assigned to the wing are expected to comply with the Defense Department's longstanding policy of not engaging in partisan political activities that may imply the U.S. military has officially endorsed a specific candidate, campaign, or cause.

“It is our intent to uphold this policy and represent the United States Air Force honorably,” Ott said.

News about the two liked tweets came on the same day that the Pentagon released a memo from Defense Secretary Mark Esper reminding all troops and civilian personnel not to make overt political statements or other gestures.

“Maintaining the hard-earned trust and confidence of the American people requires us to avoid any action that could imply endorsement of a political party, political candidate or campaign by any element of the Department,” Esper wrote in the Feb. 5 memo.

The issue of service members making partisan political statements is not unique to one particular party or candidate. In April, Maj. Ginger Tate with the South Carolina Army National Guard was caught on video attending a rally for former Vice President Joe Biden, where she told him that she was praying he would be elected president.

Tate's command took “actions they considered appropriate for the situation,” said Capt. Jessica Donnelly, a spokeswoman for the South Carolina Army National Guard, at the time.