The Army announced on Tuesday the activation of V Corps, the latest development in the U.S. military's push to build up capabilities in Europe in the face of great power competition with Russia 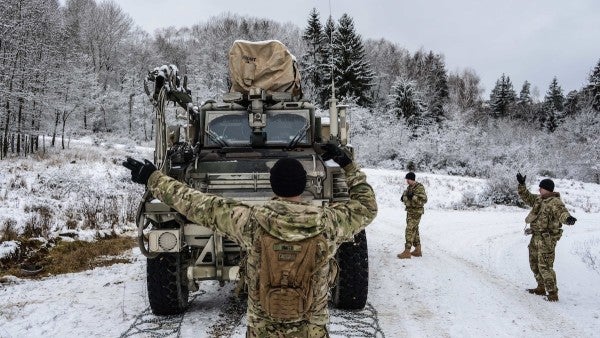 The Army announced on Tuesday the activation of V Corps (or Fifth Corps), the latest development in the U.S. military’s push to build up capabilities in Europe in the face of great power competition with Russia.

V Corps will be based out of Fort Knox, Kentucky, per Tuesday’s Army press release. It will be made up of 635 soldiers, 200 of which “will support an operational command post in Europe on a rotational basis.”

It’s expected to be operational by this fall.

“The activation of an additional Corps headquarters provides the needed level of command and control focused on synchronizing U.S. Army, allied, and partner nation tactical formations operating in Europe,” Gen. James McConville, Army Chief of Staff, said in the press release. “It will enhance U.S. Army Europe and U.S. European Command as they work alongside allies and partners to promote regional stability and security.”

According to the Wall Street Journal, Defense Secretary Mark Esper is planning to discuss where the new command will be based with his Eastern European counterparts while at the North Atlantic Treaty Organization meeting in Brussels this week.

When the V Corps went inactive in 2013, then-commander Lt. Gen. James Terry called it a “bittersweet occasion,” per Stars and Stripes. It was the first time since 1951 that Europe was without a corps headquarters.

The V Corps was first activated in 1918 to fight in France during World War I, per the Army release. In World War II, the V Corps participated in the D-Day invasion and the liberation of Europe.

The Army has been heavily focusing on security in Europe since the National Defense Strategy made building up forces to counter Russia and China primary objectives “now and in the future.”

This month, the Army will start moving equipment into Europe for the largest military exercise since the Cold War: Defender Europe 2020.

The exercise will last through July this year and include around 37,000 service members total.