The 18th Airborne Corps wants YOU… to help fix the Army

“We just realized, as we were finalizing our plans, that there’s just so much potential that we can unlock from our membership." 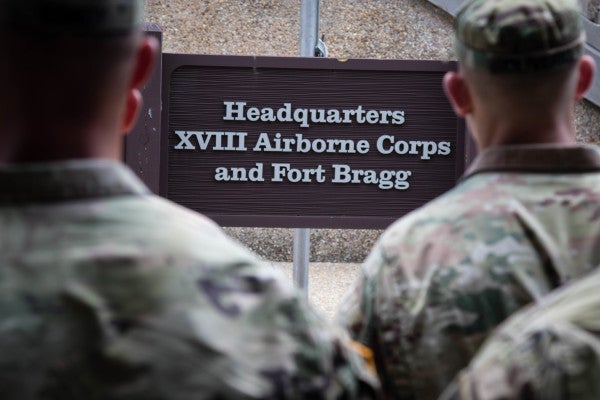 The 18th Airborne Corps wants to hear what problems its soldiers and civilians have found in the Army, and how they think they should be fixed. Seriously.

The corps launched a new initiative on Monday called the Dragon Innovation Program, which is meant to help field new solutions for problems that soldiers, civilians, and family members across all its units have identified. Based at Fort Bragg, the corps includes around 90,000 service members, and thousands more family members and civilian employees.

Brig. Gen. Robert Ritchie, the assistant commanding general of the 18th Airborne Corps, told Task & Purpose that the idea came about after Lt. Gen. Michael ‘Erik’ Kurilla, the corps commander, told his team “to look at mobilizing the potential of all members of this corps.”

There are essentially two pieces of the program: one is a challenge, wherein a new problem is identified every 90 days and participants can submit their best ideas on how to tackle it. This week, the first problem set was identified, focusing on how ranges and training areas are managed.

People participating in the challenge can see and comment on one another’s submissions, building off of each other and offering feedback to help ideas “organically mature,” Ritchie said.

(It sounds reminiscent of a Reddit thread, but with potentially less snark.)

The deadline to submit ideas is Oct. 15, and after a voting period, the Corps Innovation Panel will choose the winning submission. And it won’t only earn a pat on the back: Soldiers with winning ideas will be awarded a Meritorious Service Medal, four days off, and be given the ability to go to the school of their choice.

“I know as a lieutenant if somebody told me I got to go to freefall school, it would completely change my motivation to do something,” she said with a laugh. “It’s a serious reward. If you are medically able to go, and you want to go scuba school or jungle school or freefall school, you’ll go.”

Ritchie explained that the idea was to offer soldiers a tangible incentive to think outside of the box — though the hope is that eventually, the desire to pitch constructive ideas becomes “more ingrained” and they don’t always need the incentive of added benefits.

Soldiers and civilians within the corps are also encouraged to submit ideas on, well…pretty much anything else they think of.

Ritchie said that while they’d originally planned on having only the commander’s challenge, they realized there was an opportunity to get feedback on much, much more.

“We just realized, as we were finalizing our plans, that there’s just so much potential that we can unlock from our membership, that why don’t we simultaneously just create an opportunity for people to raise other problems and other solutions?” he explained.

On Wednesday morning, Ritchie said that there had been two new posts overnight: One suggesting changes to promotion and evaluation boards processes, and another focusing on military license transfers.

“Those are two issues that have been identified by our rank and file in the last 12 hours, both of which are real problems which we may not have been aware of,” Ritchie said. “And if we’re able to solve in partnership with those members, then it’s going to result in a tangible increase to our readiness.”

Leaders are still working through what kind of material benefits they could offer — and for how long they could offer them — to soldiers who submit more general ideas that aren’t under the commander’s challenge. They’re also still mulling over how they can incentivize families and civilians, which Ritchie said could “unlock a lot of these really complex problems.”

Master Sgt. Adam Farmer, the senior equal opportunity advisor with the 3rd Infantry Division, told Task & Purpose that his initial reaction to hearing about the challenge was that leadership “genuinely seem to be concerned about investing in soldiers,” and that it was giving some of the younger soldiers a chance to leave their mark.

“I had my time in the Army, I'm 16 years in, I’ve loved every minute of it,” Farmer said. “But at some time in the future, I’m going to go, and that private first class who’s been in for a year, who’s thinking about making a career — this is his or her opportunity to take ownership in the direction that the 18th Airborne Corps is going.”

Farmer added that he sees how it could be “a little intimidating” for a soldier to throw out their ideas to a three-star command, but encouraged soldiers to trust their leaders and know that they have “nothing to lose and everything to gain.”

Elison said that while she figures there’s likely “some skepticism” among soldiers on if leadership really wants their thoughts, she believes Kurilla is “very serious in that he wants the troop level opinion.”

“Things that brief well on paper don’t always execute well,” she said. “[The general officers] are not the ones that have to execute them most of the time, it’s, you know, squad leaders, these hard-charging staff sergeants that are executing them. So why don’t we get the ideas of how they would fix the problem?”

As Farmer put it, leaders can get “married to the process,” and sometimes the key is finding a young soldier who “has the ability to be 1,000 feet away from the genesis of that problem.”

Spc. Chafelmer Kroll, a transportation specialist with the 3rd Expeditionary Sustainment Command, may be one of those soldiers. She told Task & Purpose that she submitted an idea on Tuesday night, focused on making the licensing process more efficient for people in the motor transportation field.

Kroll said that while soldiers trained with different military vehicles in advanced individual training (AIT), once they got to their units there was “a lag time” because they needed to get more training before they could get their licenses.

“I kind of thought that was a little redundant, because you spent all your time in your AIT after basic learning how to operate these things, but once you get to your unit, you have to wait for a slot to go back to that school so you can get certified with the installation, just to be able to fully do the things that your job requires of you,” she explained.

Overall, Ritchie said they’ve been “overwhelmed” with positive feedback about the challenge so far; Sgt. Brendan Gallagher, a cavalry scout with the 10th Mountain Division, told Task & Purpose that he’s heard about it “nonstop” since word first started circulating last week. And ultimately, Ritchie said he hopes the opportunity helps soldiers take ownership of their unit.

“This is not one person’s 18th Airborne Corps,” Ritchie said. “This is our corps.”