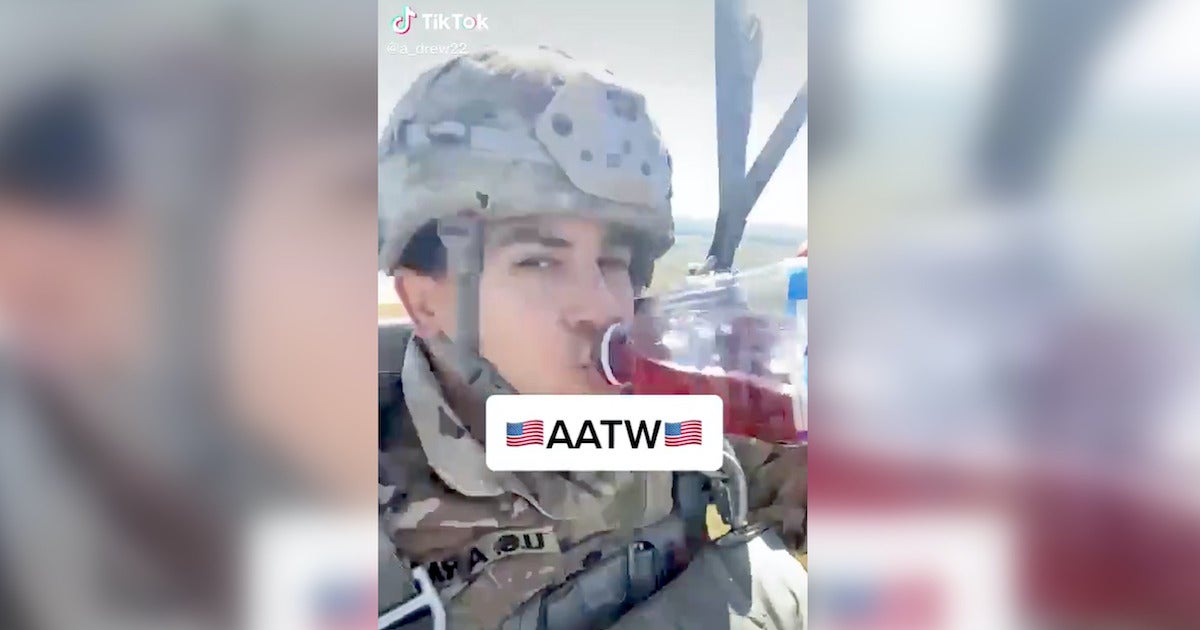 A soldier has one-upped everyone filming themselves skating while drinking cranberry juice and singing along with Fleetwood Mac with a new version of the beloved TikTok meme that was filmed hundreds of feet in the air.

(h/t to @mosbren who is a 5-star military tiktok sleuth) pic.twitter.com/NCMgjr7S7F

The video of the unidentified soldier — posted by TikTok user @A_Drew22 on Saturday — shows him under a parachute canopy singing along to “Dreams” and drinking from a jug of cranberry juice. It was captioned with “AATW,” an apparent reference to Airborne, All the Way.

The Army has said they are looking into the soldier’s actions for potential safety violations as airborne operations are “inherently dangerous,” but it doesn’t seem like they are taking it too seriously. After all, it’s not like he wore a dinosaur puppet on his hand.

“You’re supposed to really pay attention to your surroundings at all times and monitor where you are relative to jumpers around you,” said Col. Joseph Buccino, an Army spokesman. “This is not a complicated matter. It’s not even an important matter.”

The video has been viewed over 410,000 times on the social media site TikTok, though the soldier is not the person who posted the video. Buccino was unable to identify the paratrooper when asked on Monday.

The popular TikTok trend — which is known by a variety of names, including the “cranberry challenge,” “dreams challenge” or “cranberry dreams” — has seen recent involvement from former and current military members alike.

One veteran even recorded himself sitting on the edge of a flying helicopter doing the challenge.

TikTok user Nathan Apodaca started the trend in late September when he posted a video of himself riding a longboard, drinking cranberry juice and singing along to “Dreams.” To date, the video has over 60 million views.

This latest video brings to mind a similar incident from 2015, when an Army paratrooper in the 82nd Airborne Division jumped with his pet fish in a water bottle to celebrate his departure from the military.

“I wanted to make it awesome, and I did just that,” Spc. Matthew Tattersall told Army Times. The soldier was punished with 12 days of extra duty.

More recently, Army 2nd Lt. Nathan Freihofer — a field artillery officer in the 18th Airborne Corps — posted a video in late August of himself joking about the Holocaust. Freihofer — who has over 3.4 million followers — did not post for two weeks after the incident.

“The command is taking immediate action looking into this,” Buccino said at the time. “We’ve already had several discussions about this with the highest levels of 18th Airborne Corps.”

In recent months, the U.S. has taken steps to limit TikTok among the federal workforce. In December, the Defense Information Systems Agency recommended that all DoD employees uninstall TikTok from their phones. Weeks later, the Army banned soldiers from using TikTok on government phones, saying it was a cyber threat.

Soldiers can still use TikTok on their personal phones, Buccino said.

Related: Army lieutenant gets lost trying to navigate human decency after joking about the Holocaust on TikTok