"Even in the Army, all brand new uniforms with the belt, everybody wanted the belt." 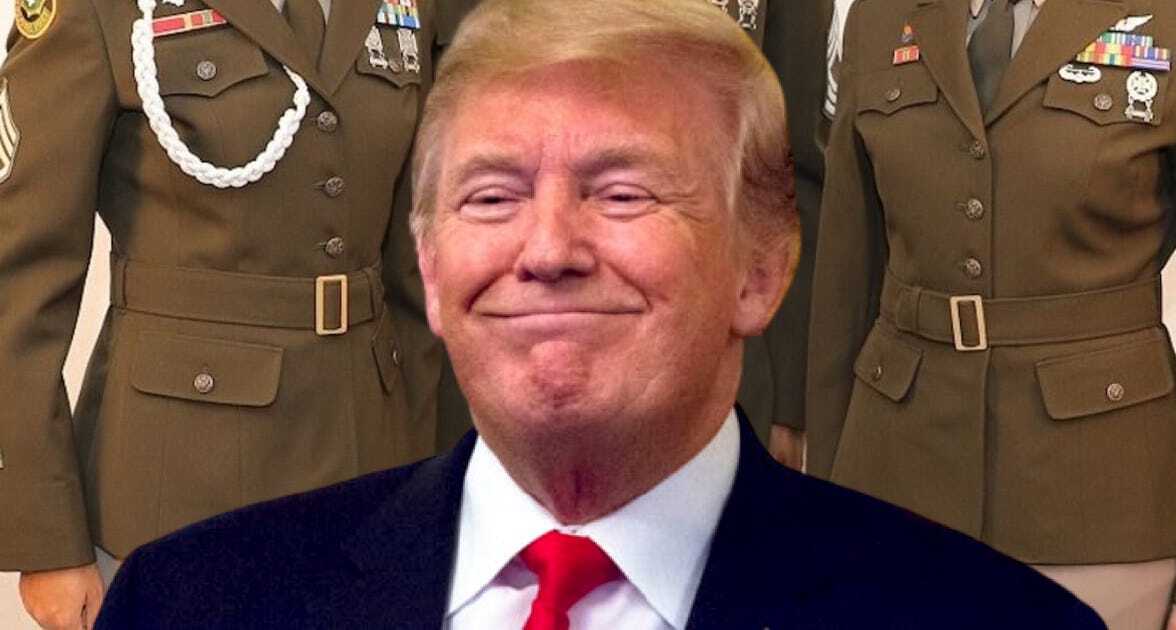 President Donald Trump has a pressing question for America’s fighting men and women: so what do you think of your new belt?

In a two-minute video released Thursday providing a clear and focused pitch to the U.S. military on his record in office, the commander-in-chief stated that the U.S. has spent $2.5 trillion on a “depleted military,” noted that bad employees at the VA can now be fired “right away,” and highlighted the “best of everything” that the military now has, including brand new tanks and planes such as the F-35, which entered service two years before he took office.

He also bragged about the Army’s newest belt for some reason.

“We’ve spent $2.5 trillion dollars over the term,” Trump said. “In office, my term. That’s over three and a half years, two-point, think of that, 2.5 trillion. I took over a depleted military, old equipment, broken equipment. Even in the Army, all brand new uniforms with the belt, everybody wanted the belt. But we spent $2.5 trillion. We got everybody pay increases, three of them. There’s never seen anything like what I’ve done for the military.”

To be clear, military pay has increased every year for more than a decade. What’s not clear is what Trump is talking about when he refers to “the belt” on the “all brand new” Army uniforms, although it’s most likely the so-called “pinks and greens” uniform that the Army began issuing in July.

Soldiers wearing the snazzy World War II throwback, officially known as the Army Green Service Uniform, wear it with a belt — just like nearly every uniform the Army has, from camouflage to dress blues.

I didn't even want the new uniform.

Narrator – they did not love the belt

After touting his accomplishments at the Department of Veterans Affairs, Trump went on to say the “military has never been stronger” and assured troops, “we have your back.”

Except in the case of his novel coronavirus (COVID-19) diagnosis, that is: on the same day this video was released, Trump suggested in an interview on the Fox Business Network that the families of fallen American service members may have been to blame for his contracting the virus.

That was a departure from Trump’s previous comments on how he may have gotten the virus, when he suggested on Oct. 2 that members of the military or law enforcement just couldn’t keep their hands off him.

You can read the entire transcript of the video below (or watch the video of Trump’s remarks here):

There’s never seen anything like what I’ve done for the military. As far as the VA is concerned, what we’ve done there with Choice and accountability. The VA would be treating people badly, we couldn’t do anything about the people that were treating our great soldiers, our great heroes badly. Now you fire him right away because of accountability. For 45 years, they were trying to get that, for more than 45 years, they were trying to get Choice.

Obama gave you a weak version that didn’t work. It was a joke. I gave you the Mission Act, which is phenomenal and it’s worked out fantastically well. And we now had a 91% approval rating from the vets, our great vets, our great heroes.

Whether it’s a rockets, or missiles, or anything you can name, we’re building a lot of ships right now. We’re getting our Navy back to where it should be. Everything that you can name is now under development or already developed and sent. Many many planes are coming. They’ve been ordered. They’re being built. They’re coming. Jet fighters, bombers, tankers. So for our military, I just want to let you know there’s never been a president that has your back like I do.