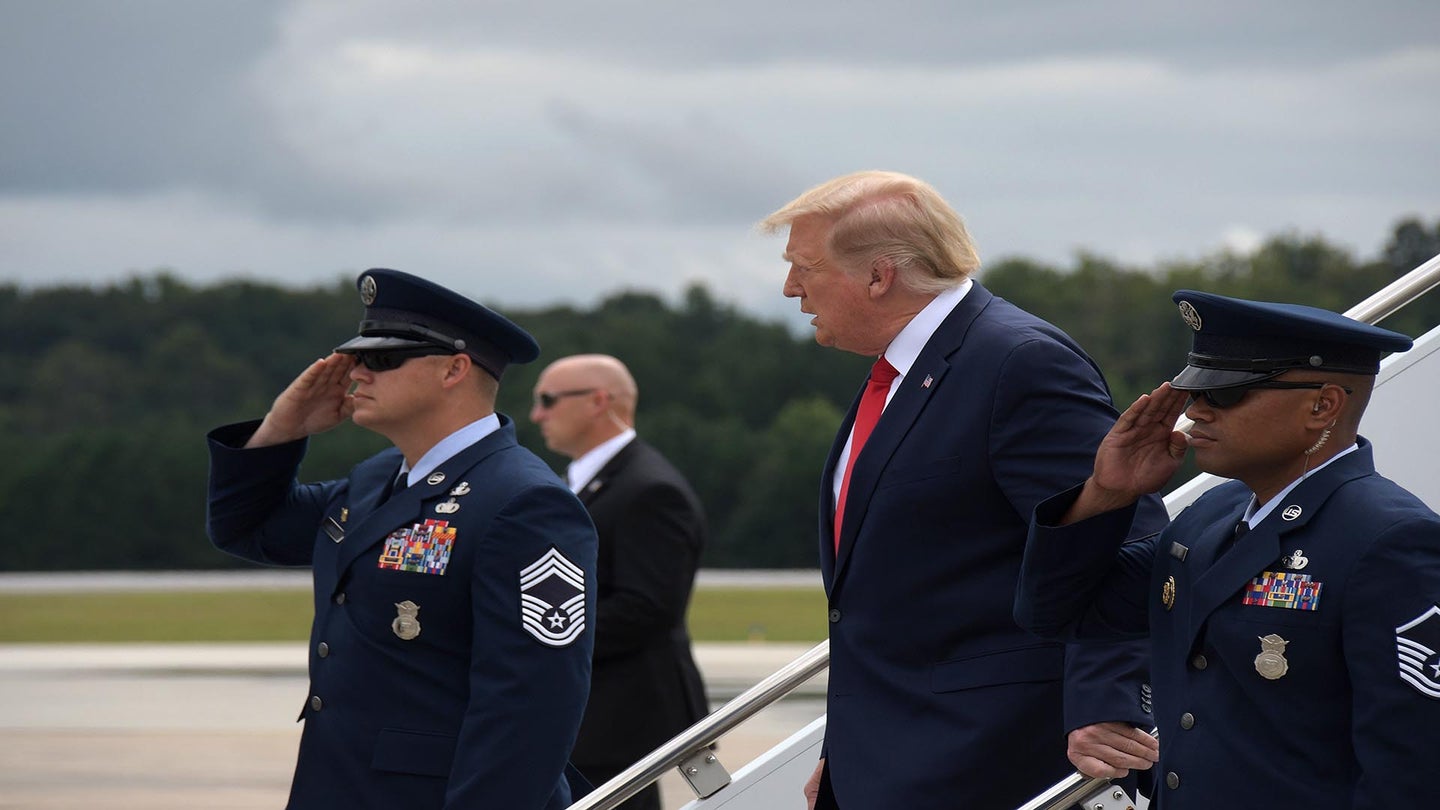 President Donald J. Trump speaks to official greeters as he steps off Air Force One at Dobbins Air Reserve Base, Ga. on Sep 25, 2020. The president transited through the base on his way to attend an engagement at the Cobb Galleria Center. (U.S. Air Force photo/Andrew Park).
SHARE

As one of his final acts while in office, President Donald Trump has vetoed the National Defense Authorization Act, setting the stage for Congress to attempt to override his decision.

“The Act fails to include critical national security measures, includes provisions that fail to respect our veterans and our military’s history, and contradicts efforts by my administration to put America first in our national security and foreign policy actions,” Trump wrote in a message to Congress. “It is a ‘gift’ to China and Russia.”

Now that Trump has officially vetoed the National Defense Authorization Act, Congress is expected to vote next week on whether to pass the defense policy bill over his objection.

Even if lawmakers are unable to override the president’s veto, service members will continue to get their base pay and their next 3% pay raise will still take effect in January.

But troops will not get any special pay unless Congress manages to pass the National Defense Authorization Act, which would increase hazardous duty pay from $250 to $275 per month. Depending on where they’re serving and what they’re doing, military personnel are entitled to various forms of special pay, from re-enlistment bonuses, to hazard duty pay, to jump or dive pay.

“If there’s not this defense authorization bill — that becomes law one way or another — before Jan. 2: Yes, members of the military will see their compensation decreased,” Rep. Mac Thornberry (R-Texas), told reporters on Dec. 7.

“They will get a pay cut — and all of these other consequences that we’ve been talking about: The Guardsmen will not be able to go on Tricare; the cyber provisions will not be put in place,” said Thornberry, the outgoing ranking Republican on the House Armed Services Committee. “That’s what will happen without this bill.”

Rep. Adam Smith (D-Wash.) the chair of the House Armed Services Committee issued a statement saying he is confident that both chambers of Congress will vote to override Trump’s veto of the National Defense Authorization Act, which passed the House with 335 votes and the Senate with 84 votes.

Earlier this month, Smith told reporters during a separate conference call that he does not expect Congress to pass a pared-down version of the defense policy bill known as a “skinny bill” should lawmakers fail to pass the National Defense Authorization Act over Trump’s veto.

Such a piece of legislation could be used to authorize special pay for troops.

“If for some reason it doesn’t pass and we can’ override the veto, the only option is to try to pass this exact deal when Joe Biden becomes president on Jan. 20,” Smith said during the Dec. 7 call. “A skinny bill is not an option because there are demands and priorities that people have that a skinny bill would not address — and then we won’t have the votes.”

In his message to Congress, Trump laid out several reasons why he had vetoed the National Defense Authorization Act. One reason he objected to the bill is that it does not revoke a federal law that protects tech companies such as Facebook and Twitter from being sued for the content that users post.

Trump also took issue with a provision in the bill introduced by Sen. Elizabeth Warren (D-Mass.), which would create a commission to rename all bases, ships, and other Defense Department assets currently named for Confederate leaders within three years.

“My administration respects the legacy of the millions of American servicemen and women who have served with honor at these military bases, and who, from these locations, have fought, bled, and died for their country,” Trump wrote. “From these facilities, we have won two World Wars. I have been clear in my opposition to politically motivated attempts like this to wash away history and to dishonor the immense progress our country has fought for in realizing our founding principles.”

Moreover, the president felt it is inappropriate for the defense policy bill to require the administration to certify that ongoing troop reductions in Afghanistan do not jeopardize American security and limit the drawdown of U.S. troops in Germany until the Defense Department provides Congress with more information about the ramifications of the move.

Likewise, the National Defense Authorization Act would require the defense secretary to certify that any reduction of U.S. troop levels in South Korea below 28,500 service members would be in the U.S. government’s national security interest.

Trump argued in his message to Congress that the president decides how many U.S. troops will be stationed in Afghanistan, Germany and South Korea — not lawmakers.

Sen. Jim Inhofe (R-Okla.), chair of the Senate Armed Services Committee, stressed on Wednesday that Congress has passed the National Defense Authorization Act for the past 59 consecutive years – and 2020 should be no different.

“Our men and women who volunteer to wear the uniform shouldn’t be denied what they need — ever,” Inhofe said in a carefully worded statement that did not object to Trump’s veto.

Inhofe called on Congress to introduce separate legislation to repeal the federal law that shields tech companies — an issue on which he and the president are in agreement.

“This NDAA cements all the remarkable gains our military has made thanks to President Trump’s leadership and sends a strong message of support to our service members and their families,” Inhofe said. “I hope all of my colleagues in Congress will join me in making sure our troops have the resources and equipment they need to defend this nation.”