Opponents of “radical alt-left” anti-fascist protesters have gathered enough online signatures on a White House petition over the weekend to... 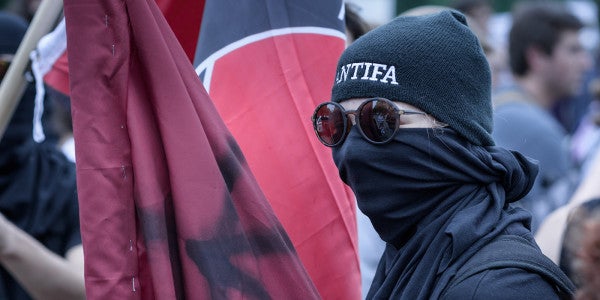 Opponents of “radical alt-left” anti-fascist protesters have gathered enough online signatures on a White House petition over the weekend to get the Trump administration to consider labeling the group a “terrorist organization” — even though the petition appears to be plagiarized from elsewhere and offers up some embarrassing factual errors.

The We The People petition to “formally recognize AntiFa” — the hardest core of the hardcore anti-racist left — “as a terrorist organization” had collected more than 200,000 signatures on Aug. 21, well above the 100,000-signature threshold to have a petition officially addressed by the White House. Using a definition of terrorism from the Oxford English Dictionary, the petition appeals to “the pentagon to be consistent in its actions… just as they rightfully declared ISIS a terror group” (the highlighting is mine; you’ll see why in a minute):

That’s a rather curious request for a few reasons, according to David Gomez, a former FBI counterterrorism supervisor and senior fellow for George Washington University’s Center for Cyber and Homeland Security: “It’s silly because the Pentagon doesn’t do that — the State Department does.”

Indeed, only State officially designates “foreign terrorist organizations” like ISIS; no federal agency maintains a registry of domestic terror groups; and domestic terrorism hasn’t been a Department of Defense issue. The Pentagon is effectively barred from domestic terror interdiction in the United States by the federal code and the Posse Comitatus Act.

That was no deterrent for “M.A.,” the unnamed author of the petition, who apparently lifted its language from a near-identical petition, created two days after President Donald Trump’s inauguration, that sought to label Black Lives Matter a terrorist organization:

That petition received only 906 votes.

But in AntiFa — a willowy group of “far left” protest organizers who’ve turned out with other groups to demonstrate against neo-Confederates and celebrate punching Nazis in recent weeks, occasionally instigating violence — critics have found a foe that apparently drives more fearful passion than Black Lives Matter. It’s not clear how many self-identifying Antifa members there are now, or how many are actually responsible for window-breaking and starting street rumbles — the two most common verifiable charges leveled against them. “Violence against windows — there's no such thing as violence against windows,” one Antifa activist has said. Others, with connections to anarchist groups, have celebrated “righteous violence” against Trump supporters.

But conservative critics and defenders of the “free speech” advocates who felt comfortable hanging with neo-Nazis in Charlottesville have painted Antifa as a murderous network of extremists bent on communist overthrow of the U.S. government.

That’s not how any of this counterterrorism stuff actually works. To have an organization labeled as a domestic terror group for investigative purposes, Gomez says the FBI must first prove “that there is definitely an organization in place” and not just a broad-based movement of people marching with occasional violent elements. “The FBI doesn’t investigate crimes involving constitutional protections like the right to assemble or the right to free speech,” Gomez says. That’s why there isn’t a terror designation for, say, the KKK — but feds go after Klansmen when they’re suspected of committing or planning a crime.

But Antifa critics, like conservative USA Today columnist and “Instapundit” blogger Glenn Reynolds, remain undeterred in their quest to have the group preemptively blacklisted as violent terrorists:

Reynolds nearly lost his column last year when he tweeted that motorists should meet civil rights protesters with violence:

(It should be noted that the only fatality on the street in Charlottesville was a protester who marched with Antifa in Charlottesville, Heather Heyer; she was killed when a car allegedly driven by a neo-Nazi plowed into a group of anti-hate demonstrators Aug. 12.)

The petition drive has already gotten a lot of support from fringe Second Amendment groups like Open Carry Texas — a group that even the National Rifle Association thinks is kind of out there — because Antifa “wants to disarm opponents so that they can mob them and destroy them with violent crimes and intimidation,” and also because nothing says “I love the Constitution” like seeking to have your political detractors jailed for terrorism.

Under the rules for its online petitions, the White House has 60 days to respond to this one. Can’t wait to see what happens.