Authorities in the United Kingdom have arrested four active-duty soldiers in the British Army for their alleged connections to a... 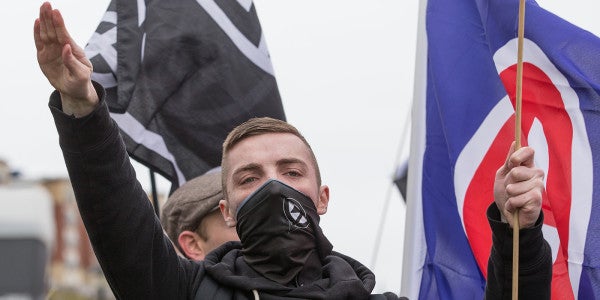 Authorities in the United Kingdom have arrested four active-duty soldiers in the British Army for their alleged connections to a Nazi front group suspected of “the commission, preparation and instigation” of terrorist acts, the Associated Press reported Sep. 5. The move comes at the end of a summer in which the U.S. was so roiled by far-right racist groups — some of whose members had military connections — that the chiefs of all the service branches came out publicly to renounce extremism.

“We can confirm that a number of serving members of the army have been arrested under the Terrorism Act for being associated with a proscribed far-right group,” the British Ministry of Defense said in a statement after the arrests, which were announced by central England’s West Midlands Counterterrorism Unit on Tuesday morning.

Reminder: You Can’t Be Both A Service Member And An Extremist »

That “proscribed far-right group” is National Action, a secretive neo-Nazi network that first surfaced publicly in 2014 on British college campuses. The physically combative, anti-Semitic, anti-immigrant white supremacist group openly celebrates Adolf Hitler and the original Nazi party because they represent “a successful nationalist movement,” according to a movement leader.

In 2014, National Action gained notoriety for protesting a statue of Nelson Mandela in London, at one point sticking a banana in the African civil rights leader’s hand.

National Action has gained notoriety in recent years for its violent rallies, intimidating attempts to create “white zones” in major English cities, and calls to fight “the disease of international Jewry.” But the last straw for the British government came last year, when the neo-Nazis gave open support to a right-wing activist who murdered a Labour member of Parliament, Jo Cox, in broad daylight.

Last December, the government announced that it was designating National Action a terrorist group, making membership a crime punishable by fines and 10 years in prison. Twenty-two members of the group were arrested in 2016, police say.

One of National Action’s recruiting flyers.

Authorities disclosed no further details on the soldiers arrested in the latest operation, telling the AP only that they’d been picked up in a “pre-planned and intelligence-led” raid of National Action-connected properties, with “no threat to the public’s safety.”

The U.K. and other European countries have seen an uptick in far-right extremism in recent years, and the arrests may strike a nerve across the pond as the U.S. military community contends with service-connected radicals after the deadly racist protests in Charlottesville.

There’s “no place for racial hatred or extremism in @USMC,” Marine Corps Commandant Gen. Robert Neller tweeted after Charlottesville. “Our core values of Honor, Courage, and Commitment frame the way Marines live and act.” That’s true, as many vets have pointed out. But the fact that even a few organized hatemongers are military-connected — and that leaders like Neller have to draw a public line in the sand, in 2017 — suggests the U.S. and its allies have a longer struggle ahead of them to keep race extremists from preying on recruits in the ranks.