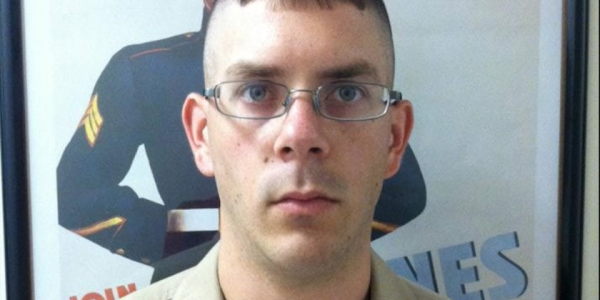 James Alex Fields Jr., the 20-year-old Army basic training wash-out accused of running down counter-protesters demonstrating against hate groups in Charlottesville, Virginia, may not have been the only U.S. military veteran marching under the banner of white nationalism this weekend, Splinter reports.

Dillon Ulysses Hopper, the self-described “CEO” of the Vanguard America neo-Nazi hate group whose members appeared alongside Fields in a widely-circulated photograph taken at the rally, reportedly joined the Marine Corps in 2005. A veteran of the wars in Iraq and Afghanistan, Hopper’s military records show the 29-year-old New Mexico native (whose birth name is Dillon Irizarry) served as an enlisted Marine, an information security technician (MOS 0681).

What makes Hopper’s background even more troubling is his service at home. A Vanguard America representative told Splinter that Hopper has identified as a white supremacist since 2012, the same year he started a three-and-a-half-year stint as a Marine recruiter in Ohio, where he was assigned to recruit students in at least one high school. A photo from that era shows a clean-shaven, bespectacled Hopper standing in front of a Marine Corps recruiting poster.

These days, Hopper reportedly goes by the name “Commander Dillon” — and his “army” was on full display at the #UniteTheRight rally in Charlottesville on Aug. 12, when the group marched alongside other extremist organizations in protest of the city’s decision to remove a statue of Confederate general Robert E. Lee. The ensuing clashes with counter-protesters left a 32-year-old woman dead and dozens more injured, sparking national outrage.

Hopper managed to rise to the rank of staff sergeant and remained on active duty until January 2017, according to his military records. He claimed in an interview with Splinter that he became the leader of Vanguard America one year ago. Marine Corps policy prohibits members from participating in organizations “that espouse supremacist causes,” and violators face possible separation or non-judicial punishment. Evidently that wasn’t enough to deter Hopper.

Hopper’s ascension to the head of Vanguard America may be evidence of a growing and troubling trend within the U.S armed forces. A 2008 FBI report found that “white supremacist leaders are making a concerted effort to recruit active-duty soldiers and recent combat veterans of the wars in Iraq and Afghanistan.” According to Splinter, Hopper deployed twice overseas, serving in Operation Iraqi Freedom in 2008 and in Operation Enduring Freedom in 2010. It is unclear if he ever saw combat in his role as an information security technician.

Hopper in 2017 in Pikeville, KentuckyPhoto via Anti-Defamation League

Vanguard America reportedly formed in California in 2015 and, according to its website, is guided by the belief that that America has been “brought to its knees by decadence,” and “White Americans will be a minority in the nation they built” if “current trends continue.” To join the group, a person must be “of at least 80% White/European heritage,” and not a criminal or addict of any kind, explains the group’s website. “Homosexuals, transexuals, adulterers, or any form of sexual degeneracy,” also need not apply.

Hopper told Splinter that he was not present at the Charlottesville rally due to the recent death of his mother. He also insisted that Fields is not a member of Vanguard America and the group had not yet been contacted by law enforcement.

Hopper’s claim appears contradicted by the fact that Fields, who served in the Army for less than four months before washing out, was photographed standing in a Vanguard American formation holding a shield and wearing the group’s uniform: khakis, a white collared shirt, and a thousand-yard stare that seems to say, “this guy is really, really good at computer games.”

Despite the visual evidence, Hopper stood by his claim, saying in a statement to Splinter that Fields “is not affiliated nor was ever a member of my organization.”

“He was photographed in our ranks due to poor leadership and uncooordination at the event,” Hopper said. “He does not represent us in any way shape or form and we condemn his irredeemable actions.”