Seven U.S. service members have been identified as members of Identity Evropa, a white nationalist group founded by a Marine veteran and tied to the 2017 Charlottesville rally, according to leaked online chat logs examined by HuffPost 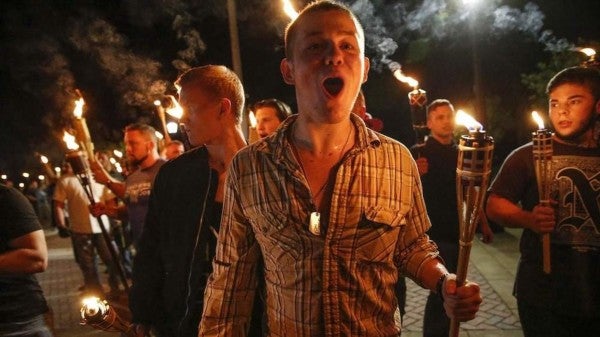 Seven U.S. service members have reportedly been identified as members of Identity Evropa, a white nationalist group founded by a Marine veteran and tied to the 2017 Charlottesville rally, according to leaked online chat logs examined by HuffPost.

The logs — which originated from the group chat app Discord and were leaked by the media collective Unicorn Riot —contain messages that, per HuffPost, “indicate that they hold deeply racist and anti-Semitic views and participate in Identity Evropa propaganda campaigns, posting stickers and flyers in cities and on college campuses.”

The service members identified by HuffPost include a soldier, two Marines, an airman, a member of the Texas National Guard, and two Army ROTC cadets; each branch of the U.S. armed forces confirmed their respective service.

Identity Evropa, founded by Marine corps veteran Nathan Damigo, was one of several white nationalist groups involved in the violent clashes at the the 2007 'Unite The Right' rally protesting the removal of a statue of Confederate general Robert E. Lee in Charlottesville in 2017.

The investigation comes amid growing concern over white nationalism in the military following the arrest of Coast Guard Lt. Christopher Hasson on drug and gun charges and for planning to “murder innocent civilians on a scale rarely seen in this country,” prosecutors claimed.

A search of Hasson's home in February revealed 15 firearms and over 1,000 rounds of ammo along with a hit list of targets that included prominent liberal Democratic politicians and media personalities.

A 2008 FBI report found that “white supremacist leaders are making a concerted effort to recruit active-duty soldiers and recent combat veterans of the wars in Iraq and Afghanistan,” suggesting that most hardcore extremist groups “have some members with military experience, and those with military experience often hold positions of authority within the groups to which they belong.”

According to a 2017 Military Times poll weeks after violent clashes at a rally in Charlottesville, Virginia, more than 30% of service members see white nationalism as a significant threat to national security.

By comparison, only 27% said the same about Syria, 22% for Afghanistan, and 17% for Iraq — results that suggest a fighting force increasingly wary of domestic threats to good order and discipline.

WATCH NEXT: White Nationalists Are Recruiting Veterans For Their Cause