The Marine lance corporal who came under investigation in February for racist social media posts is being kicked out of Corps with an "Other Than Honorable" discharge. 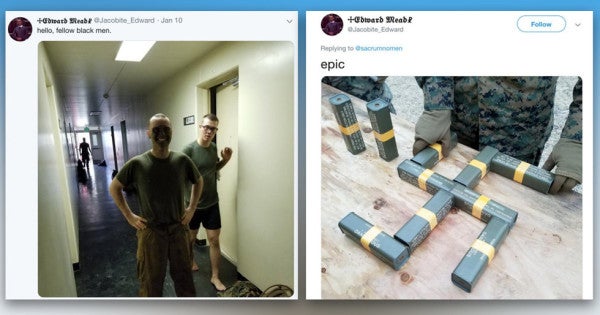 The Marine lance corporal who came under investigation in February for racist social media posts is being kicked out of Corps with an “Other Than Honorable” discharge.

Lance Cpl. Mason E. Mead, an infantry assault Marine with 1st Battalion, 3rd Marine Regiment, is currently in the process of being discharged after he admitted to “advocating supremacist ideology” on May 7, which allowed him to separate from the Corps in lieu of being court-martialed, III Marine Expeditionary Force said in a statement to Task & Purpose.

Mead's discharge disqualifies him from receiving benefits from the Department of Veterans Affairs.

News of Mead's pending discharge was first reported by Gina Harkins at Military.com.

Mead had repeatedly praised Nazis and their World War II collaborators on his Twitter account. He also shared images taken while in Marine uniform, such as one of himself wearing dark camouflage face paint in which he wrote, “hello, fellow black men.” Another showed high explosives being formed into a Nazi swastika, which he wrote was “epic.”

According to III MEF, Mead, 20, admitted guilt after being charged with Article 92, or failure to obey order or regulation. The Corps has a number of regulations regarding equal opportunity and how Marines should behave on social media.

“The Marine Corps takes every instance of misconduct seriously, whether on duty, off duty, or online. Any form of racism or discrimination undermines the core values of the Marine Corps and is not tolerated,” the statement from III MEF said.

Mead is not the first alleged white supremacist to be outed among the Corps' ranks in recent years. Lance Cpl. Vasillios Pistolis was found to be a member of a neo-Nazi group who bragged about attacking a woman at “Unite The Right” rally in Charlottesville, Virginia in 2017. He was later found guilty at court-martial, served time in the brig, and was kicked out in August 2018.

Two other Marines were arrested in May 2017 for after flying a white supremacist banner in North Carolina; both were subsequently discharged.