"Due to the public interest of a Marine officer allegedly involved with White Nationalist groups, a release of the investigation of 2nd Lt. Maher could result in a chilling effect that could interfere with further law enforcement steps or follow on proceedings." 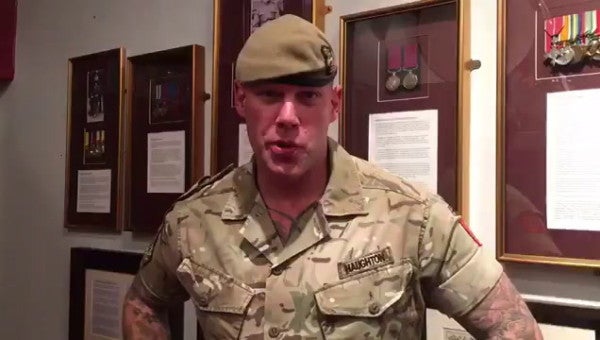 A Marine officer under investigation for allegedly posting racist remarks on social media appeared in court last month, but the Marine Corps is refusing to say what charges he faces.

In June, Corps officials confirmed that 2nd Lt. Felippe Maher was under investigation after a Twitter user at Penn State University revealed images and video that purportedly came from Maher's Snapchat story, showing Maher and others at a party eating fried chicken and watermelon to mock Martin Luther King Jr. Day. Those images included several captions that used the N-word.

The Twitter user also posted a picture of a man who looks like Maher allegedly serving as a bodyguard for white supremacist Richard Spencer at a Nazi rally. Task & Purpose could not independently verify that Maher was in the picture.

Separately, Task & Purpose found a picture Maher had posted of himself on Facebook with the caption “Gucci Goy.” The word “Goy” is a Hebrew term for non-Jews but white nationalists are also fond of using it to jokingly describe themselves.

Maher's Article 32 preliminary hearing was held on Oct. 16, said 1st Lt. Sam Stephenson, a spokesman for Marine Corps Combat Development Command, who was unable to provide any further information about the proceedings, including what Maher is charged with.

“That information cannot be released until after the Article 32 preliminary hearing results have been reviewed,” Stephenson said on Wednesday.

Charge sheets are generally considered public documents and military officials rarely refuse to release them, except for cases that involve classified information or sensitive national security issues. Even though Maher has not been referred to a court-martial, he has still been charged. The future disposition of those charges is irrelevant to the fact that a charging document currently exists.

Task & Purpose has twice been denied after requesting Maher's charge sheet through a Freedom of Information Act request.

On Oct. 15, a Marine Corps FOIA officer claimed that releasing the charge sheet and the command investigation into Maher would interfere with ongoing law enforcement proceedings.

The Navy's Judge Advocate General's Office denied Task & Purpose's appeal for both documents on Nov. 1, adding that Maher's charge sheet could not be released “until 2nd Lt. Maher is convicted at a court-martial.”

“Due to the public interest of a Marine officer allegedly involved with White Nationalist groups, a release of the investigation of 2nd Lt. Maher could result in a chilling effect that could interfere with further law enforcement steps or follow on proceedings,” wrote G.E. Lattin, director of the general litigation division.

“I find that if the investigation was to be released, the Government's case could be prejudiced as witnesses could be contacted and their testimony effected or evidence tampered with,” Lattin continued. “Release of the investigation could also inform other suspects of law enforcement interest. Additionally, 2ndLt Maher's defense could be prejudiced by disclosure of this information.”

Maher is one of six Marines who have been investigated for allegedly posting racist material on social media since 2018.

On Oct. 1, Pvt. Anthony Schroader was administratively separated after he sent an Instagram picture of Marines using their boots to form a swastika to “Terminal Lance” creator and Marine veteran Maximilian Uriarte, said Maj. Roger Hollenbeck, a spokesman for Marine Forces Reserve.

Correction: Lance Cpl. Riley S. Kuznia was shot and killed on Jan. 1. Lance Cpl. Andrew Johnson is charged with murder and other offenses in connection with Kuznia's death.