He's also been charged with obstruction of justice. 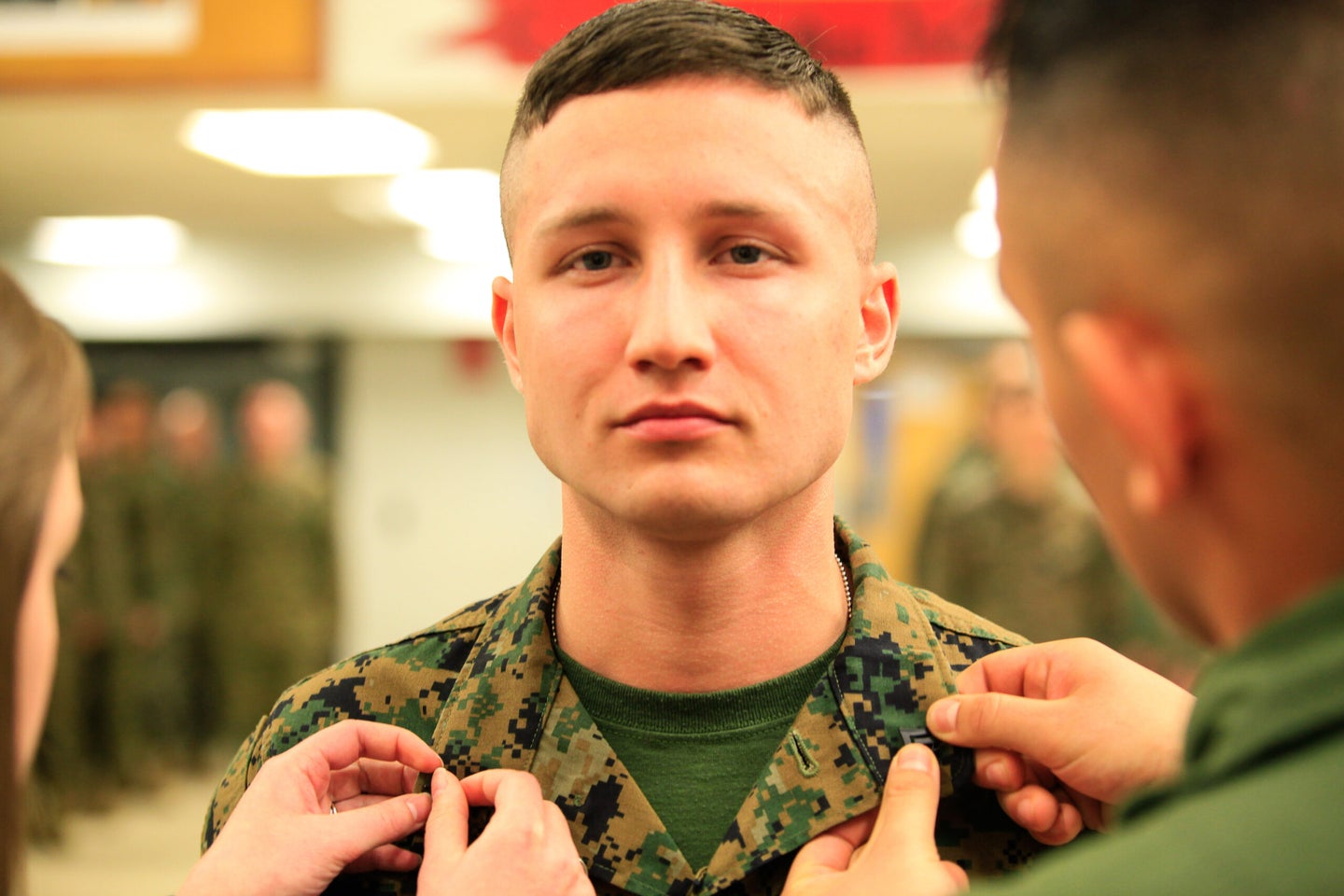 Naval Support Facility Indian Head, Md. – Manhattan, Kan.-native Gunnar A. Naughton, a team member with the Identification and Detection Platoon (IDP), Reaction Force Company, Chemical Biological Incident Response Force (CBIRF), U.S. Marine Forces Command (MARFORCOM), is meritoriously promoted the rank of corporal during a battalion formation at Naval Support Facility Indian Head, Md., Mar. 2, 2016. In the Marine Corps, the rank of corporal is the first noncommissioned officer level rank, and corporals have a responsibility to their subordinates and superiors unlike any other. Naughton competed against three other CBIRF Marines on a meritorious board of his superiors to be selected for this promotion. On a meritorious board, Marines are selected based on multiple factors including physical fitness, military appearance and Marine Corps Knowledge in order to assess whether the Marine is ready to take on the responsibilities and duties of a higher grade. (Official USMC Photos by Sgt. Jonathan S. Herrera/Released).
SHARE

A Marine sergeant in the 1st Reconnaissance Battalion will go to court-martial this summer on charges he dumped several stolen grenades and more than 10,000 rounds of ammunition into a California ravine.

Sgt. Gunnar Naughton has been charged with dereliction of duty, obstruction of justice, wrongful disposition of military property and other charges related to an alleged theft of ammunition from Camp Pendleton over several months starting in the fall of 2020, according to a charge sheet provided to Task & Purpose. The 28-year-old Marine operator “willfully failed to safeguard ammunition on Range 110,” the charge sheet said, “as it was his duty to do.”

Naughton, who was arrested on Feb. 4 and is now confined in the Pendleton brig, is also accused of stealing about 840 rounds of 5.56 mm ammunition and allegedly had “powder used for blasting” in his off-base residence. It appears, however, that Naughton is not the only person involved in the alleged theft. Officials acknowledged to Task & Purpose that a Marine corporal was under suspicion but they declined to provide his name.

“Adjudication is ongoing regarding the other individual from 1st Reconnaissance Battalion with preferred charges,” said 1st Lt. Kyle McGuire, a spokesperson for 1st Marine Division. “This is the extent of the releasable information I can provide on this individual at this time.”

ABC 10 reported in March that at least five reconnaissance Marines were under investigation for stealing explosives and ammunition from the base after one allegedly tried to sell ammo online to federal agents in the course of a sting operation.

Meanwhile, Naughton’s charge sheet says he allegedly removed ammo cans from the residence of a staff sergeant on Feb. 2 “in an attempt to obstruct” justice in the case of the corporal, whose name is redacted. On the same day, Naughton allegedly told a Navy petty officer to delete communications on his Whatsapp and Signal apps in a similar attempt to obstruct justice for the corporal.

Then on Feb. 3, Naughton allegedly dumped several grenades and tens of thousands of rounds into a ravine in Fallbrook, California. The following ammunition is listed on the charge sheet:

Prosecutors also accused Naughton of disposing of a 9mm Beretta pistol but later dropped the charge.

Naughton was set to go to trial on Friday morning, according to the western Navy-Marine Corps court docket. But a Marine official told Task & Purpose the court date has since been moved to July 1.

Naughton joined the Marine Corps in January 2015, according to military records. After completing boot camp and initial training in September 2015, the Manhattan, Kansas, native was assigned as a chemical, biological, radiological, nuclear defense specialist with the Marine incident response force in Indian Head, Maryland tasked with responding to nuclear, biological, chemical and other attacks on Washington. He joined the 1st Reconnaissance Battalion in November 2019.

You can read the full charge sheet below: