It looks like America broke The Code, and not in a good way 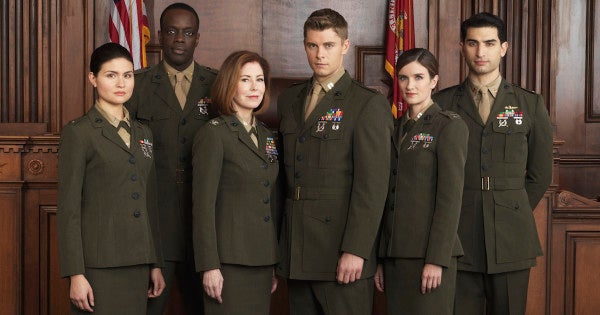 It looks like America broke
The Code, and not in a good way.

CBS has decided not to renew the “modestly rated” but notoriously inaccurate military drama for a second season, Deadline reported on Tuesday, just one day after the first season finale.

Dana Delany, who starred as the fictional Col. Glenn Turnbull, shared the news of the cancellation on Twitter. “I'll never make General,” she
wrote,” but I loved this cast of stellar actors & know we'll meet again. Semper Fidelis.”

Thank you to all you wonderful people who watched @TheCodeCBS. Last night was our finale and sadly, no more. I’ll never make General. But I loved this cast of stellar actors & know we’ll meet again. Semper Fidelis. ?? pic.twitter.com/kqjcZBTRzo

CBS clearly wanted the to find the next
JAG in The Code, where “the military's brightest minds take on America's toughest challenges inside the courtroom and out, where each attorney is trained as a prosecutor, a defense lawyer, an investigator—and a Marine,” according to the official synopsis.

But based on the critical response of military and veterans observers,
The Code focused more on how to inaccurately portray service members than the intricacies of the military justice system. Indeed, the series' pilot episode focused on the court-martial of a Navy O-5 who, inexplicably, appeared in the uniform of an O-3.

Among the other problems:

Dear The Code, My husband, a retired FMF Corpsman has military accuracy Tourette’s, meaning I have to pause your show so he can run down all the inaccuracies regarding military uniforms, order of ribbons, haircuts, etc. So if you could work on all that I’d appreciate it.

THE COVER ON THE FEMALE MARINE OFFICER!!! HEINOUS!!! pic.twitter.com/KBrA5R1CNq

Lots of legal issues like the prosecution calling the accused as a witness, counsel openly discussing details of plea negotiations in front of the court members and the president of the court disclosing the vote tally (5-4) while announcing the verdict.

Tonight on The Code: We find out if these two Devil Dogs can get shirts to fit any tighter. Will they finally find sleeves that are the same length? The secret to why the Colonel can’t fucking shoot is also revealed. Tune in for all these answers and more fuckery! pic.twitter.com/9Dg0gJG9oF

To make matters worse, the short spots that CBS opted to shit out all over social media are so
riddled with enough inaccuracies to give even the world's healthiest Marines a stroke. Which is to say nothing of this condescending bullshit:

Marine Corps Times reporter and human dynamo J.D. Simkins
put it best: “Across services, more women are integrating into combat arms jobs than ever before, but how on earth could a woman possibly balance duties as an officer and a wedding planner?”

Look, Hollywood and the rest of the entertainment industry
frequently make mistakes when it comes to the portrayal of U.S. service members, and it's sometimes understandable given the intricacies of production. But if you're out to replicate the impact of series like JAG, the least you can do is get basic military protocols down.