The former CEO of Starbucks, Howard Schultz, opened his mouth, and quickly inserted his foot when he claimed that he spent more time with the military than other 2020 presidential candidates 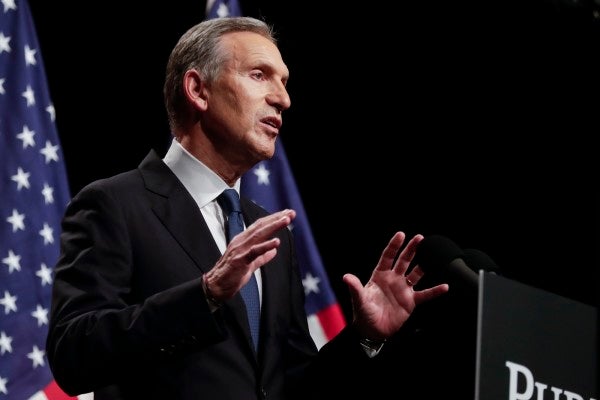 During a radio interview on Thursday, former CEO of Starbucks Howard Schultz opened his mouth and quickly inserted his foot, claiming that he spent more time with the military than other 2020 presidential candidates.

It's a claim he walked back real friggin' fast.

The mistake occurred during an interview with radio host Hugh Hewitt. Schultz, who is considering a 2020 run as an independent, was asked if he had enough familiarity with the military to serve as commander in chief, CBS News reported.

“Yes, I do,” Schultz said. “I probably have spent more time — in the last decade, certainly — than anyone running for president, with the military. I've been to Okinawa. I've been to Kuwait. I've — with Marines, with the Army. I've been to the national training center in Mojave Desert.”

Schultz apparently didn't realize that two military veterans are considering running in the next election: Pete Buttigieg, the mayor of South Bend, Indiana, and Rep. Tulsi Gabbard (D-Hawaii), who are both military veterans.

Buttigieg deployed to Afghanistan as an intelligence officer in the Navy Reserve in 2013, Stars and Stripes reported. Gabbard served in Iraq from 2004 to 2005, as well as Kuwait from 2008 to 2009. And Buttigieg, for his part, wasn't going to let this slide:

I remember a Green Beans Coffee at the exchange at Bagram, and a decent espresso machine run by the Italian NATO element at ISAF HQ. But I don’t recall seeing any Starbucks over there… https://t.co/GOkL8Li3r8

After Buttigieg pointed out Schultz's gaffe on Twitter, the former coffee exec walked his comments back in a pair of tweets:

I apologize to @PeteButtigieg and @TulsiGabbard who served our country honorably. In that moment I made something that should unite us all, about me. I made a mistake and I apologize.

Noting your affiliation with the military, as a way to lend a bit of gravitas to whatever it is you're doing, is nothing new. There are honestly too many damn examples to pull from, whether it's the president of the United States talking about his relationship with “his generals” or notable journalists embellishing their war-time coverage or that random guy at a bar who finds a way to spin his almost-enlistment story into an epic tale of almost-daring.

Saying you've spent time with the troops is the new form of name-dropping, and not just because being around the military is cool or sexy. More importantly, people will automatically assume a whole bunch of things about the content of your character, which may be why some veterans seeking office feature their past service so prominently (though there are likely many cases where that's due to well-placed pride.)

Unfortunately, the result is this feedback loop of half-assed one-upsmanship, and subsequent (and equally half-assed) outrage. Just consider Buttigieg's call out to Schultz: Namedropping a Green Beans coffee shop, as if to say, “you don't know, man. You weren't there…”

As Starbucks CEO, Schultz had a demonstrated track record of hiring veterans; in November, the company announced it had hired some 21,000 vets since promising in 2013 to hire 10,000 over five years. He should focus on that rather than leaning on second-hand swagger he picked up during a base visit. Those who see through the veneer of plastic patriotism will probably thank him for it.

SEE ALSO: 8 Smart Ways For Veterans To Win Any Election