The White House is preparing to assemble a panel of experts to evaluate whether climate change poses an imminent threat to the national security of the Unites States despite the fact that multiple defense and intelligence agencies have affirmed the role of extreme climate shifts as a threat multiplier to the U.S. military 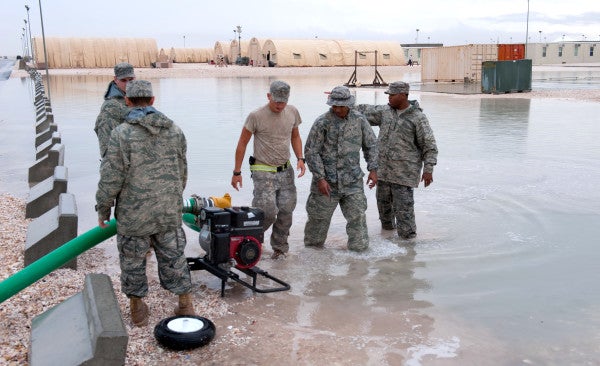 The definition of insanity, the old saying goes, is doing the same thing over and over again and expecting a different result — a definition that applies perfectly to the Trump administration's response to the looming national security threat of global climate change.

The White House is preparing to assemble a panel of experts to evaluate whether climate change poses an imminent threat to the national security of the Unites States, according to multiplemedia reports, despite the fact that multiple defense and intelligence agencies have affirmed the role of extreme climate shifts as a threat multiplier to the U.S. military.

Those assessments, the Trump administration alleges, “have not undergone a rigorous independent and adversarial scientific peer review to examine the certainties and uncertainties of climate science, as well as implications for national security,” according to a draft document.

Translation: We're going to keep asking questions until we get an answer we like.

The so-called Presidential Committee on Climate Security is just the latest push by the Trump administration to downplay the scientific certitude of global climate change as security threat that began in earnest when the Trump administration completely dropped climate change from the National Security Strategy presented to Congress in December 2017.

As recently as November 2018, Trump dismissed the landmark National Climate Assessment released by his administration as a matter of 'belief' rather than science.

“One of the problems that a lot of people like myself, we have very high levels of intelligence but we're not necessarily such believers,” Trump told reporters during a bizarre Oval Office rant following the NCA's release. “As to whether or not it's man-made and whether or not the effects that you're talking about are there, I don't see it.”

Trump may not see it, but defense officials do. In 2014, the Pentagon conducted a sweeping review designed to assess vulnerabilities to extreme weather among military installations and how the U.S. armed forces could better prepare for an uptick in natural disasters. That report resulted in the DoD's 2014 Climate Change Adaptation Roadmap, a series of steps for assessing and mitigating the effects of climate change on military operations around the globe.

That roadmap was formally implemented by President Barack Obama in January 2016, only to end up invalidated when Trump rescinded all of his predecessor's federal agency actions related to climate change. The saving grace for the Pentagon's climate adaption efforts came from then-Defense Secretary James Mattis, who effectively circumvented Trump's order in line with his own pledge to address climate change as a national security threat.

“The effects of a changing climate — such as increased maritime access to the Arctic, rising sea levels, desertification, among others — impact our security situation,” Mattis wrote in his prepared remarks ahead of his confirmation hearing in March 2017. “I will ensure that the department continues to be prepared to conduct operations today and in the future, and that we are prepared to address the effects of a changing climate on our threat assessments, resources, and readiness.”

With the full momentum of senior military intelligence officials behind the assessment of climate change as a long-term national security threat, the newfound presidential commission is a baffling development — especially since the 2018 defense budget Trump signed into law affirmed that climate change “will threaten the operations of more than 128 United States military sites, and it is possible that many of these at-risk bases could be submerged in the coming year.”

If the definition of insanity is doing the same thing over and over again expecting a different result, then the Trump administration's push for an “adversarial” assessment of climate science is batshit crazy — although not as batshit crazy as insisting that climate change is a hoax perpetrated by the Chinese.

SEE ALSO: 5 Ways Climate Change Will Impact The US Military