Marine Commandant: Border deployments aren’t hurting readiness, even though I said they would 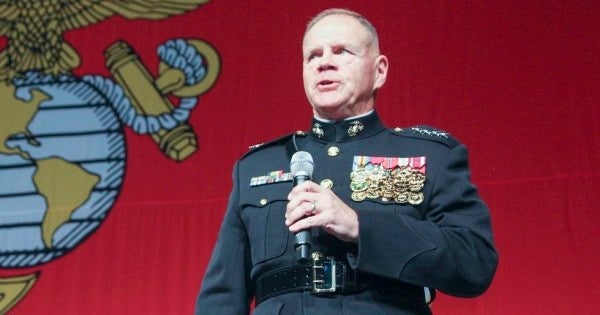 Neller testified before the Senate Armed Service Committee that despite the “unacceptable risk to Marine Corps combat readiness and solvency” posed to Marines by “unplanned/unbudgeted” exigencies
detailed in the leaked memos in March, Trump's border deployments hadn't actually affected Marines.

“I personally checked the readiness of every unit , and with only one exception there was no impact on their actual readiness,” Neller claimed,
per Defense News. “In fact a couple of units improved their readiness. So to say going to the border was degrading our readiness was not an accurate statement.”

“What I tried to articulate was if we didn't get funding for these , we would have to look at other sources for money, which could potentially include other exercises, which would eventually affect the readiness of the force,” he added.

To be clear: Neller told lawmakers that “to say going to the border was degrading our readiness” is not accurate, as if that claim were coming from someone other than himself. But the general literally mentioned “Unplanned/unbudgeted Southwest Border Operations” and “Border security funding transfers” among a total of nine negative factors that were “imposing unacceptable risk” to the service's combat readiness and solvency in his memo.

I mean, seriously, it's on the first page.

Neller went on to write in the memo that training exercises cancelled to free up Marines for emergency border deployments, despite their paltry monetary cost — Neller told SASC that the border deployment had only drained the Corps of about $6.2 million to date, well below the $3.6 billion to Corps says it needs to repair post-Michael in North Carolina — would also inevitably degrade the Corps' effectiveness.

“Marines rely on hard, realistic training provided bu these events to develop the individual and collective skills necessary to prepare for high-end combat,” Neller wrote in his memo. “Although some effects can be mitigated, the experience lost by these units at a critical time in their preparation cannot be recouped.”

Neller's comments before lawmakers on Tuesday raise more questions than they answer, but there's another possibility of what's going on here: Neller wanted to make sure the Corps got the resources it needed for hurricane recovery before funneling cash into unplanned budget expenditures like the non-threat at the southwest border.

Indeed, a Pentagon source told Newsweek that Neller authorized the leak because “he didn't want the Marines and families at Camp Lejeune to get f***ed” by political jousting in Congress over the Trump administration's fiscal year 2020 budget request. “This is something that you go to the mat over,” one Marine general
reportedly said in a Pentagon meeting the following week. “Your Marines and their families.”

If that was the plan, well, it didn't go amazingly. Neller wrote on Twitter that the Corps “received word that Congress has agreed with the administration's request to reprogram $400 million to help Marines and their families recover from damage inflicted by Hurricanes Florence and Michael. Which is good, but it's also way below the $3.6 billion the Corps said it needed.

1/2 We have received word that Congress has agreed with the administration's
request to reprogram $400M to help Marines and their families recover from
damage inflicted by Hurricanes Florence and Michael.

2/2 I am grateful to the President, DoD, Congress, and the DON for their leadership and support on this issue. @realDonaldTrump @DeptofDefense @secnav76

SEE ALSO: The White House Will Keep Challenging The Pentagon On The Threat Of Climate Change Until It Gets An Answer It Likes

WATCH NEXT: Marine Commandant Gen. Neller Does His Final CFT