Congratulations, Marines: After years of drama, the long-awaited M27 Infantry Automatic Rifle is finally coming to a platoon near you — if you're lucky 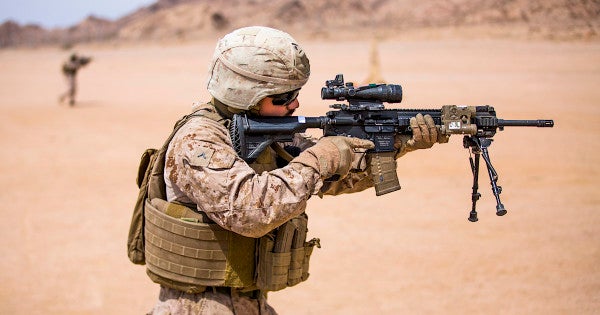 Congratulations, Marines: After years of drama, the long-awaited M27 Infantry Automatic Rifle is finally coming to a platoon near you.

A Marine Corps Systems Command spokesman told Marine Corps Times that the last of the service's 14,000 M27s have officially arrived in the Corps's inventory. But while the Corps's procurement contract with gunmaker Heckler & Koch provides for a maximum of 50,184 weapons, MARCORSYSCOM said that the service doesn't plan on purchasing more than its current arsenal.

With a relatively scarce number of M27s in its arsenal, it's 0311s and platoon leaders who will get first crack at the new rifle, followed by drone and counter-drone specialists that Marine Commandant Gen. Robert Neller envisioned as critical additions to the Corps' newly-reformulated rifle squads.

First wielded by Marines in Afghanistan in 2011, the M27 quickly became a favorite among many infantrymen. With an effective firing range between 600 and 700 meters, the 5.56mm rifle significantly outranges the M4 carbine in precision fires and offers comparable suppressive fire capabilities to the M249 Squad Automatic Rifle with less ammo.

So what's the deal with the limited arsenal? Congress, probably: As Task & Purpose previously reported in April 2018, the Congress's fiscal 2019 defense budget withheld 20% of the $29.4 million that Neller previously requested for M27s until it could square how investing in the 5.56mm rifle fits in with the Army's pursuit of a 6.8mm rifle as its M4 carbine replacement in lieu of the M27.

“The Army and Marine Corps work closely together to achieve common solutions for the majority of small arms capabilities, to include ammunition and fire control,” Marine Corps spokesman Richard Long told Task & Purpose at the time.

Lawmakers, however, are missing the fact that Army and Marine Corps “are divergent on their small arms programs because they are divergent on their doctrinal employment of the squad,” as retired Chief Warrant Officer 5 Christian Wade, former gunner for the 2nd Infantry Division, told Task & Purpose at the time. “That's not a judgment on the U.S. Army. The Marine Corps has a different squad size with a different composition and different weapons.”

It's worth noting that these difference matter within the Corps as well. Marine Corps Times notes that Marine Special Operations Command Raiders opted to keep their M4 carbines in lieu of an M27 upgrade, citing the flexibility provided by former's lower receiver and SOCOM-specific upper receiver for special operators who frequently swap out different components for different missions.

Still, Marines are likely amped to get their hands on the new rifle. About half have been fielded already, according to Marine Corps Times; the Corps plans to finally field them to every rifleman at the platoon level in the next two years.

WATCH NEXT: Gunner Fact Or Fiction: Semi Or Full Auto?