A gentle suggestion for U.S. military public affairs officials: Not everything needs to be about "lethality" 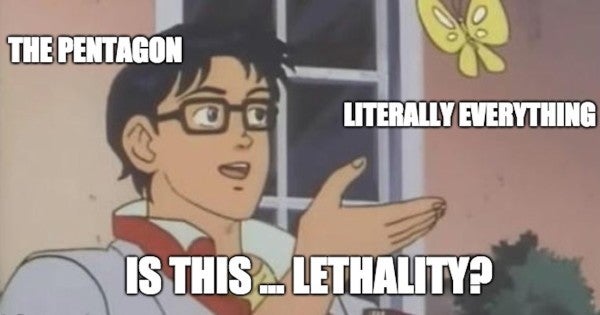 A gentle suggestion for U.S. military public affairs officials: Not everything needs to be about “lethality.”

Sure, the capacity to produce death has become the single most important measure of the U.S. armed forces thanks in part to former Defense Secretary James Mattis, but that doesn't mean you need to define absolutely everything in terms of lethality.

Take this insane headline from the Air Force installation and Mission Support Center on the service's health food initiative, which is, well, galling:

The “human weapons system” mentioned here is the American airman, and according AFSVA's Food and Beverage Division chief, Bill Spencer, the service is focused on providing them “with the right nutrition to increase lethality; ensuring a more ready force to meet mission requirements.”

Are you kidding me with this shit?

First of all, U.S. service members aren't “weapons systems,” and describing them in the language of the the M27 Infantry Automatic Rifle or F-35 Joint Strike Fighter is weirdly dehumanizing. Yes, Gunnery Sgt. Hartman pledged to transform Marines into “killing machines” in Full Metal Jacket, but that was boot camp hype. Talking about the “human weapons system' makes it sound like DoD planners forgot Johnny Rico's most important lesson from Starship Troopers: “Men are not potatoes.”

More importantly, the over-reliance on military jargon is a great indicator of why the civil-military divide exists in America. Keep things short and simple, people! If you're a public affairs official, your job is to communicate to the public in a somewhat clear and coherent fashion, and clogging up your message with unnecessarily complex terminology is a bad sign. Case in point, from this release:

With G4G, Airmen and their families can, at a glance, tell which menu items are better fuel for their bodies with simple stoplight signage.

The stoplight system is based on green, yellow and red color schemes.

Items coded as green mean they are good for your body and should be eaten often. Yellow is eat occasionally as they're moderate-performance foods and red is eat rarely because they're low-performance foods that are processed and low in nutrients.

This all leads me to the most important point: STOP TRYING TO JAM LETHALITY INTO EVERY PRESS RELEASE. IT'S NOT GOING TO HAPPEN.

WATCH NEXT: Mattis On The Kill-Casualty Radius Of His Knife Hand