We heard there was a military sex manual called the 'Combat Kamasutra,' so we tracked down the author and asked him why he made it. 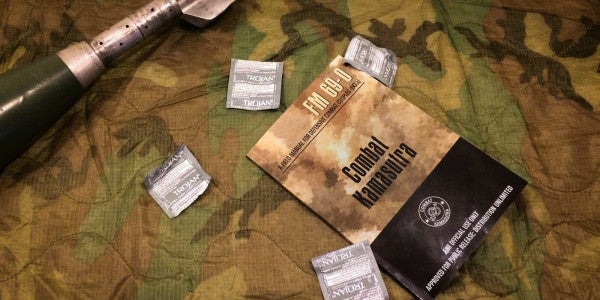 War is a constant, but as long as mankind continues to wage it, there are those who will find ways to get down, while shit goes down. So why not create a repository of knowledge for all that combat-zone coitus?

At least, that's the general theme of the Combat Kamasutra, a parody sex book created by Navy and Army veteran David B. Johnson. Self-published in 2012, Johnson's foray into the world of sarcastic sex advice faded into obscurity, until it was recently resurfaced on Twitter by TheWarax, a popular military and veterans account (he speaks for all veterans, of course).

(Needless to say, this article and the book itself, is probably within the realm of not safe for work, so proceed with caution and hide your kids).

Intrigued and a little wary, I bought a copy of the book (for $16.69 on Amazon) and reached out to the author to find out why he'd gone through the trouble of making something as bizarre as this:

To get a feel for the tone of Combat Kamasutra, justread the author page, which describes Johnson's origin story in the style of a Chuck Norris joke:

“David B Johnson burst from his mother's womb in a pre-dawn assault on Houston, Texas,” it reads. “While his birth went according to plan, the rest of his life proved to be anything but typical. The all-American boy has had a life full of adventures down roads less traveled.”

Those roads included attending the U.S. Naval Academy, joining the service as a Navy surface warfare officer in 2002, a stint at sea aboard the USS Kauffman, before heading over to the Army in search greater adventure “on dry land” where he served as an infantry platoon leader, and deployed to Baghdad, Iraq between 2006 and 2007. Johnson left active duty in 2008 and served in the reserves until 2010, while he pursued a career in film and television as a military technical adviser in Los Angeles, before moving over to advertising, he told Task & Purpose.

“Why I was so proud of this book is because we were living really thin, we were living in studios, and I had two gigs, and I was writing this on the side,” he said. “I actually felt really happy with how it turned out.”

The idea for thebookcame in 2011 while Johnson was hanging out with a friend, and “she dropped her keys, and somebody walked into her from behind, and we kind of accidentally manifested one of these positions,” he told Task & Purpose. “Then we started going 'wait a second, how would you actually, you know, if you're a couple in combat?'”

So they spent the next several hours coming up with different positions and circumstances for couples — what the Combat Kamasutra calls Defense Combat Couples, or DCCs — to bone in battle.

The book is modeled after a military field manual and comes with the designation “FM-69-0.” Heavy on jargon and barracks humor, the Combat Kamasutra is “designed for use by registered Defensive Combat Couples (DCCs) working in Co-Ed Combat Environments (CCEs),” reads the preface. “The techniques in this book allow combat couples to maneuver effectively through war zones without the sacrifice of sexual intimacy.”

“I'm going to get in trouble for this, because even though general order says that you can't, soldiers do hook up in Iraq,” said Johnson. “You're over there for a year, things are going to happen. So the influence was, what if in the future, they authorized it, and allowed married couples to be deployed in the same unit?”

The book itself isn't explicitly billed as a parody, but it's hard to imagine anyone taking it too seriously, though some have (this author's wife for one, who texted him, concerned, about his Amazon Prime purchase history after buying the book.)

“So, what was funny was, my grandparents actually got this and got a bunch of copies and sent it out to their friends before they read it,” Johnson told Task & Purpose. “And I had to explain to all of them that this was a parody, and I was trying to be funny, then they asked 'would you really have sex like this in combat?' And I was like, 'Oh, uhm, yes? No? Maybe?' But it's been funny how many people actually thought this was serious.”

While the final illustrations were done by CreateSpace, an online publisher for self-published books, the initial sketches were done by Johnson's mother, who is an artist and insisted on helping, he told Task & Purpose.

“My mom helped me sketch the initial drawings,” he said with a laugh. “And I was talking my mom through the positions and she was like 'I don't know about these.' She didn't do the final drawings, but she did help me with the initial sketches.”

Of all the scenes in the book, and there's a lot to pick from, whether it's “Back Blast Area Clear” or “The Oil Check,” the maneuver Johnson says he's most proud of is the “Hartman Boathook,” which is dedicated to Staff Sgt. John Hartman, who was killed in Baghdad, Iraq by an improvised explosive device strike in 2006. The section describes Hartman's heroic intervention during a night out, when a woman began choking on the garnish from her drink.

“With swift action and 'The Hartman Boathook,' he dislodged the obstruction and saved her life,” reads the passage. “A few moments later, she was back on her feet and thanking him profusely. He promptly asked her out to dinner and the rest is history.”

“That was actually my friend and a guy who was on our team who was actually killed,” Johnson said. “His name was John Hartman, and we honor him every year, and I just wanted to give a shout out to him, because he really was a good guy, and funny enough that story actually happened back in our party days.”

“I just wanted to immortalize him a little, that was another reason I wrote the book,” Johnson said.

Watch Next: In Praise Of Stock Photo Heroes