New photos suggest that the old war horse will have more than just a bit part to play in "Top Gun: Maverick." 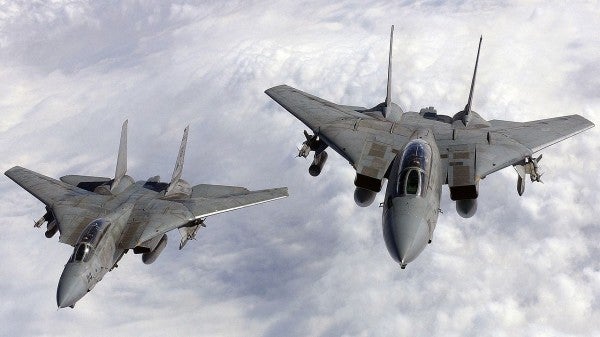 Since the sequel to the 1986 action flick (and wildly successful Navy recruitment tool) Top Gun, was announced, there's been a lot of speculation on what Top Gun: Maverick will be about when it premieres in June 2020. While the plot is still relatively unclear, we know Tom Cruise will reprise his role as Naval aviator Pete “Maverick” Mitchell, and he'll be joined by a recognizable costar: The iconic F-14 Tomcat.

It looks like the old war plane will be coming out of retirement for more than just a cameo. A number of recently surfaced photos show an F-14 Tomcat aboard the USS Theodore Roosevelt, alongside Cruise and members of the film's production crew, the Drive's Tyler Rogoway first reported earlier this week.

In Rogoway's initial Feb. 14 article, and a follow-up story, he explains that the Tomcat seen on set is actually a museum piece that was cleaned up for its return to the silver screen. The last of the Navy's Tomcats were retired by 2006, and the one shown on the deck of the Roosevelt appears to have come from the San Diego Air And Space Museum, The Drive reported.

Additionally, photos showing the aircraft tangled up in the ship's crash barricade suggest that Mav may end up having to make an unexpected landing aboard the Roosevelt in the upcoming film. As Rogoway writes for The Drive:

The fact that the F-14 is set up to appear as if it made an emergency landing into the ship's barricade indicates that this is likely the culmination of a tense action sequence in the film. The barricade is a nylon net that is attached to the ship's arresting gear system that 'catches' a stricken airplane that cannot, or has a very low probability of, 'trapping' normally aboard the ship by catching one its arresting wires.

The news that the film will feature an actual F-14 comes as a relief to those who were concerned that Top Gun: Maverick would be little more than a CGI dogfight extravaganza. That said, it's unlikely we'll see an actual Tomcat take to the sky, because as Rogoway notes, there aren't any that are still operational in the states.

Directed by Joseph Kosinski, in addition to Cruise, the cast for Top Gun: Maverick includes Val Kilmer — yes, Ice Man is back — as well as Jon Hamm, Jennifer Connelly, and Ed Harris.

SEE ALSO: It Looks Like The Legendary F-14 Tomcat Is Making An Appearance In 'Top Gun 2'