When I saw that the renowned aviation reporter Tyler Rogoway had unearthed a 1985 pre-release interview with the Top Gun... 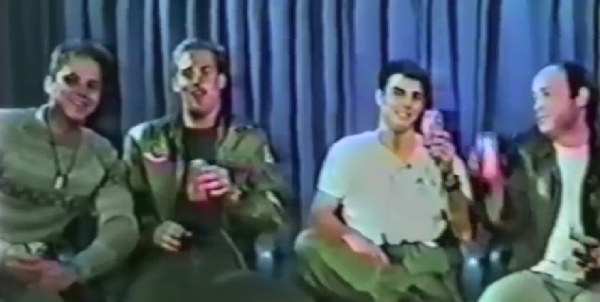 When I saw that the renowned aviation reporter Tyler Rogoway had unearthed a 1985 pre-release interview with the Top Gun cast by the media crew aboard the USS Enterprise, my heart raced faster than a Kenny Loggins jam. But after watching that slice of retro cinema, I mostly felt pity for the poor Navy petty officer who managed to somehow antagonize Tom Cruise during a contractually-obligated interview.

As much as I love anythingTop Gun related, the whole sit-down felt like a forced dog and pony show. The saving grace of the entire thing, however, was Anthony Edwards, the iconic radar intercept officer known as ‘Goose’. Edwards managed to slide in a handful of sideways quips and inappropriate one-liners to pad out Cruise’s one-word answers. To compound the already poor audio and the frazzled interviewer, the howl of jet engines interrupted the interview about once every few minutes. The parts that are intelligible bounce between a snide Cruise and a goofy Goose.

In one exchange, the out-of-his-depth public affairs sailor clumsily asks ‘Why did you take the part of Pete Maverick?’ to which Cruise slowly spelled out his character’s entire name. “For the money!” interjects Goose. “Say you did it for the money!”

Ironically, the most enthusiastic audience response came when Edwards described his character as “kind of the lighter side” of the Maverick-Goose duo. “He has a wife and kid,” he says, adding that Goose “is probably the one who graduated 2nd to last out of his class in Annapolis, and it’s probably the best role in the movie.” (The howls of laughter probably also masked the deep sadness inside every RIO in the audience that failed to be a pilot.)

To be honest, the full interview if fascinating, but it sure seemed that the whole cast was tired, seasick, and had as much desire to be in that interview room as a cat wants to be in the water. But then again, that mustachioed E-2 will always get to say he interviewed Tom Cruise on an aircraft carrier — and no amount of poor production value can take that away from him.