The SR-71 Blackbird spy plane is the fastest and highest-flying production aircraft to ever hit the skies. Despite the U.S.... 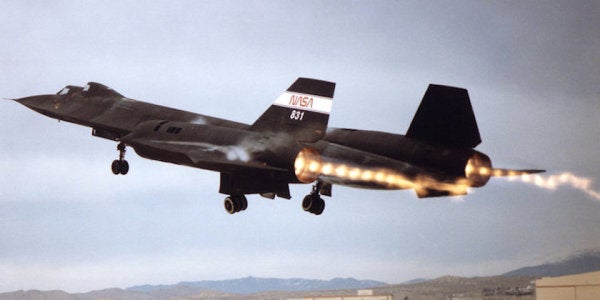 The SR-71 Blackbird spy plane is the fastest and highest-flying production aircraft to ever hit the skies.

Despite the U.S. Air Force officially retiring the Blackbird in 1990 (although NASA would use two of them for research in that decade), it remains to this day one of the most popular and captivating aircraft.

The SR-71 was developed in the early 1960's in response to two U-2 spy planes getting shot down — one over the Soviet Union and one over Cuba.

Thousands of missiles would be fired at Blackbirds during the 24 years it was in service, but the U.S. never lost one because of its incredible speed.

Each engine gave the Blackbird 32,500 pounds of thrust

NASA's SR-71 streaks into the twilight with full afterburner on the first night/science flight from the Dryden Flight Research Facility, Mar. 9, 1993.Flickr/MashleyMorgan

The Blackbird had a maximum speed of Mach 3+, which is more than 2,000 mph or three times the speed of sound

In fact, U.S. Air Force pilot Eldon Joersz got a Blackbird up to 2,193 mph (Mach 3.2) in 1976 over Edwards Air Force Base in California, setting a world record for fastest piloted jet flight

Joersz also set a highest-altitude record during the 1976 flight, reaching nearly 85,069 feet, over 16 miles above the Earth — and the records still stand today

“During high-speed cruise conditions, the balance of total thrust was produced by the unique design of the engine inlet and a moveable conical spike at the front of each engine nacelle,” according to NASA.

“Under these conditions, air entering the inlets bypassed the engines, going directly to the afterburners and ejector nozzles, thus acting as ramjets.”

More than 4,000 missiles were shot at Blackbirds during its 24-year career, but the aircraft was so fast they simply accelerated away. Another advantage was their ability to fly at super high-altitude

Despite no Blackbirds ever being hit by missiles, they did have a 30% crash rate