Everyone loves the idea of Pentagon brainiacs working overtime to engineer the next Captain America, but the DoD's latest soldier enhancement... 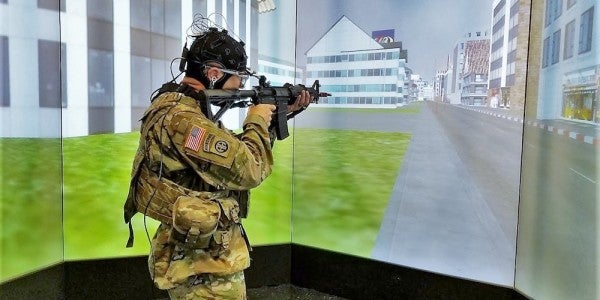 Everyone loves the idea of Pentagon brainiacs working overtime to engineer the next Captain America, but the DoD's latest soldier enhancement program wants to use electrical pulses to the cranium to achieve a relatively mundane result: to enhance soldiers' learning abilities and help get through tedious training faster.

Scientists from the Army's Natick Soldier Research, Development and Engineering Center have experimented with delivering low voltage electrical currents to certain areas of the brain — a process called neurostimulation — to volunteers in an effort to “accelerate learning and… bring Soldiers up to a level of high performance quickly,” according to an Army release.

And it works, dangnabbit! According to the Army, soldiers who volunteered for neurostimulation and engaged in subsequent tactical exercises in “large virtual-reality caves” showed highly improved motor skills, situational awareness, and navigational abilities.

Dr. Aaron Gardony, cognitive scientist at the Natick Soldier Research, Development and Engineering Center, points out the type of headset that is normally used for neurostimulation research. The cap consists of electrodes that can stimulate specific parts of the brain to enhance concentration or performance. The cap and other neurostimulation devices were on display in the Pentagon courtyard for Close Combat Lethality Tech Day, May 23-24, 2018.Jared Keller

Some were better able to recognize suspects in counterterror exercises after they’d studied a watch list of suspected terrorists during an earlier neurostimulation session. Other participants in urban training simulations “did better moving between objectives” during mid-exercise neurostimulation (no word on any parkour action). Neurostimulation also increased attention spans, allowing test volunteers to stare at a security monitor for 20 hours without their attention waning.

“We've seen a lot of positive effects of neurostimulation in our lab.” NSRDEC cognitive scientist Dr. Tad Brunye said in an Army release. “We want to make sure that we stimulate the right areas of the brain, at the right time, in the right individual, in a manner targeted to specific tasks that we need them to excel on.”

Cool. Cool cool cool. So when do we get to learn kung fu?