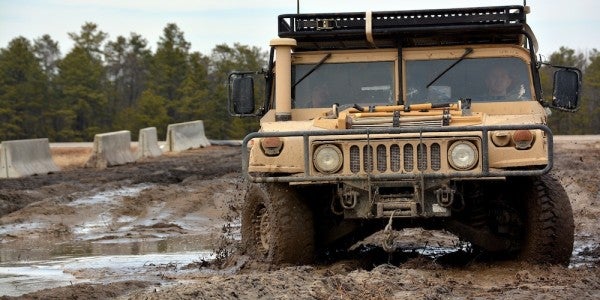 Glorious news for all privates who've ever had to haul a Humvee out of a mud-filled ditch: A brand new wheel designed by the Defense Advanced Research Projects Agency' (DARPA) could make the pain of rough terrain a thing of the past.

As part of the Ground X-Vehicle Technologies (GXV-T) program to boot the survivability and mobility of Army combat vehicles, DARPA researchers whipped up high-tech Reconfigurable Wheel-Track (RWT) upgrades that “transition from a round wheel to a triangular track and back again while the vehicle is on the move” — in short, allowing Humvees to transform into tracked vehicles on the fly.

“For mobility, we've taken a radically different approach by avoiding armor and developing options to move quickly and be agile over all terrain.” DARPA GXV-T head Maj. Amber Walker said in a June 22 release on the program's most recent demonstrations. “We look forward to working with the services to transition these technologies into ground vehicle technologies of the future.”

There's no fielding date specified in DARPA's latest update on its mobility projects, but the new wheel-track mechanism would prove a major boon to the Humvee, which has been plagued by issues downrange as part of its operational tenure during the Global War on Terror. Indeed, the services are currently eyeing the Joint Light Tactical Vehicle (JLTV) as a long-term, modular replacement to the Humvee.

But while the new RWT upgrade may give the Humvee added maneuverability over an alleged 95% of off-road terrain, per DARPA, there's one major problem on the horizon: Actually fixing the damn thing if it breaks down. We can hear all you motor transport troops already groaning over futzing with this expensive machine on the side of the road. It's OK, let it all out; we're here for you.