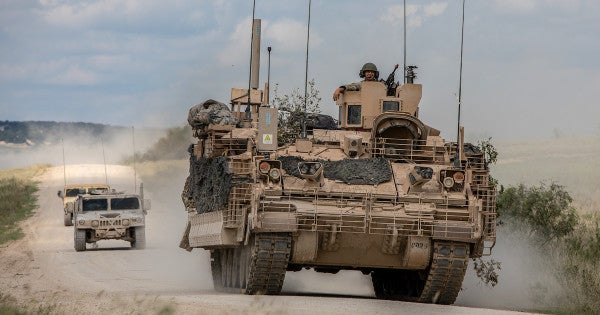 The Army has awarded a $575 million contract to BAE Systems for the initial production of its replacement for the M113 armored personnel carriers the service has been rocking downrange since the Vietnam War.

BAE's selection for the new Armored Multi-Purpose Vehicle (AMPV) first initiated in 2013 offers both 73% more carry capacity compared to the M113 APC and improved survivability over other platforms, according to the defense contractor.

Army plans on purchasing 2,897 vehicles to replace the various M113 variants currently in use by frontline combat brigades. The new contract brings total funding for an initial AMPV production run to some $873 million, per Reuters.

AMPV has been on a fast track towards production since late 2018, when Army officiials announced that the armored, all-terrain vehicle had “performed very well” during testing at Fort Hood, per Breaking Defense, placing the program 90 days ahead of schedule.

Here's how we imagine the contract negotiations between the Army and BAE probably went.

Army: Sorry boo it's late and we're already over budget

Yeah, I wrote this entire post just to use that GIF. Fight me.