Buckle up: the Army is going to start testing robotic combat vehicles next year 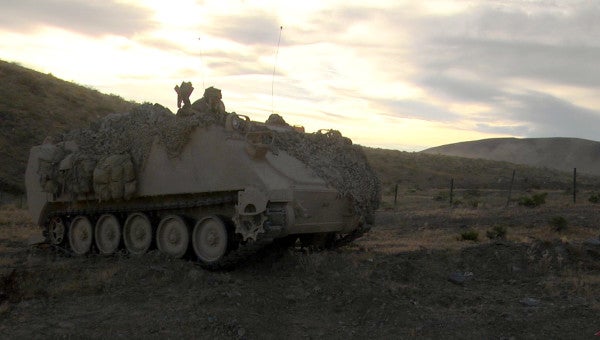 A battlefield full of remote-controlled robot battlewagons is closer to reality than you think.

The Army plans to begin the first of several rounds of testing for robotic combat vehicles (RCVs) next March at Fort Carson, Colorado, the service announced.

The tests will see soldiers blast away at targets with a platoon of RCVs, which they'll control from the back of modified Bradley Fighting Vehicles dubbed Mission Enabler Technologies-Demonstrators (MET-Ds).

The first test at Fort Carson will include two MET-Ds and four RCVs, which are built onto M113 armored personnel carriers.

Each MET-Ds will host a driver, a gunner, and four soldiers who will conduct platoon-level maneuvers with with 360-degree cameras, a remote turret, and touchscreens.

This is the first time soldiers will be operating the MET-Ds, according to David Centeno, Jr., the chief of the Combat Capabilities Development Command's Ground Vehicle Systems Center's Emerging Capabilities Office.

This is just the first of many trials for the Army's arsenal of robot vehicles. The next test in 2021 will use six MET-Ds and the same four M113 RCVs, along with four light and medium RCVs, conducting company-level operations.

Maj. Cory Wallace, the RCV lead for the Next Generation Combat Vehicle Cross-Functional Team (NGCV CFT), said that test would examine how the vehicle “integrates into a light infantry formation and performs reconnaissance and security tasks as well as supports dismounted infantry operations.”

A third test is planned for 2023, with the same number of MET-Ds and M113 RCVs accompanied by four medium and four heavy RCVs.

After each test, the NGCV CFT and the Ground Vehicles Systems Center will use soldier feedback to improve the vehicles for future tests.

Ultimately, these RCVs would allow soldiers to conduct missions without being in the direct line of fire. Wallace said that before a threat ever came in contact with a human, it would have to “make contact with the robots,” allowing commanders more “space and time to make decisions.”