Meet the Ripsaw M5, the unmanned battlewagon that can launch drones and sneak up on enemies 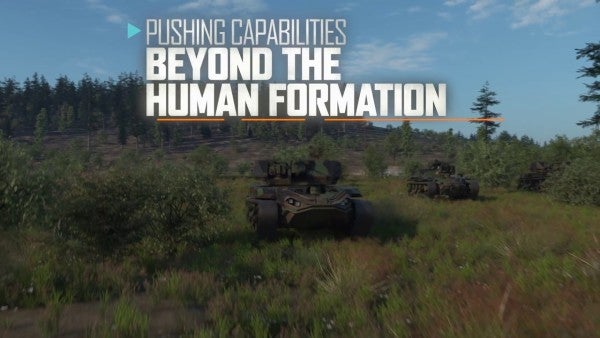 This robotic combat vehicle design was on display Monday at the Association of the United States Army conference in Washington, DC.

The vehicle is modular, meaning that the top turret can be reconfigured for different mission sets, and scalable, which is to say that it can be pitched as a solution for the light and medium robotic combat vehicle programs. The Army has yet to put out an request for proposal, so this is seen as a conversation starter.

The Ripsaw M5 is a multi-mission combat platform equipped with 360-degree sensing capabilities. While this vehicle has a top speed of about 40 mph, it has the ability to approach targets silently.

One of the most interesting features of the Ripsaw M5 is its ability to deploy other drones, namely the tethered FLIR R80D SkyRaider drone and the ground-based FLIR SUGV.

“Incorporating our world-class intelligent sensors and unmanned assets on the Ripsaw M5 will provide a leap-ahead technology solution for the Army,” David Ray, president of FLIR Systems' Government and Defense business unit, said in a press statement.

“From cameras delivering 360-degree situational awareness to surveillance gimbals, tethered drones and ground robots, we'll give our troops a tactical edge by keeping them on technology's edge.”

Of the drones the M5 can carry, the SkyRaider is a tethered quadcopter drone with the ability to provide high-quality video and images of the battlespace any time day or night, offering valuable beyond line-of-sight reconnaissance and target recognition capabilities and increased situational awareness.

The SUGV is a small, portable unmanned vehicle that can climb stairs and manipulate objects, as well as offer imaging services for EOD, surveillance, and remote inspection missions.

“The battlefield is filled with really awful places where humans do tasks today they shouldn't have to,” Brig. Gen. Ross Coffman, director of the Army Next Generation Combat Vehicle Cross-Functional Team (NGCV-CFT), explained recently.

“But today,” he continued, “with the way our technology has advanced, our robotic vehicles can move forward of a manned force to see what's out there, detect chemicals, put direct fire on the enemy, determine whether or not there's an obstacle, and then team with humans to determine the best course of action.”

The Army is currently interested in acquiring three classes of Robotic Combat Vehicles (light, medium, and heavy). The service requested $160 million in Research, Development, Test and Evaluation funding for the RCV in its Fiscal year 2020 budget request.

The expectation is that these vehicles will serve as scouts for follow-on forces and escorts for accompanying units, among other potential missions.