The sun may not be out, but the guns certainly are 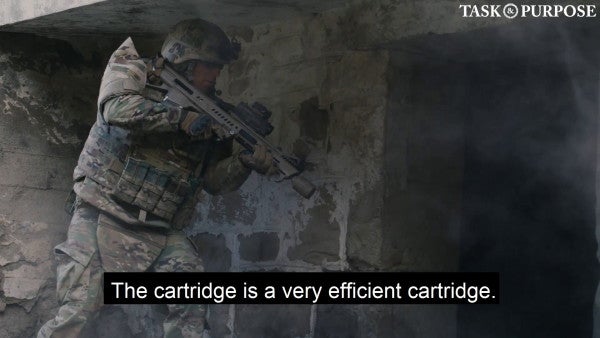 The sun may not be out, but the guns certainly are.

General Dynamics Ordnance and Tactical Systems, AAI Corporation Textron Systems and Sig Sauer Inc. were all chosen in August as finalists for developing the Army's Next Generation Squad Weapon, one of the service's primary modernization priorities, and all three companies were touting their best best rifle and automatic rifle prototypes at the Association of the U.S. Army's annual conference last week.

Task & Purpose stopped by the General Dynamics booth at AUSA to get a better look at their prototypes for the Army's next rifle of choice.

Both guns have a bullpup design and are both are shorter than the weapons they're hoping to replace, which Kevin Sims, the senior director of business development for General Dynamics, said would “maximize the effects downrange.”

And while it may seem like “a far-fetched idea” for the Army to shift towards a bullpup-style rifle, as Military Times pointed out, “it wouldn't be the first time companies have made overtures to the DoD with prototypes featuring that configuration.”

“They 3D print these things, with multiple materials too, so there aren't … welds,” Sims told Task & Purpoise. “There aren't open spaces and cavities for gas to leak — this is a highly efficient suppressor, and it's very lightweight.”

Sims told that General Dynamics recently had Army personnel test out both prototypes and are already making changes to the fire control mechanisms based on the feedback they've received.

One of the three companies will be the one to replace the M4 carbine and M249 squad automatic weapon for the Army, the first of which plan to be rolled out to an infantry brigade combat team in 2023.