Army officials may have some lofty aspirations for the service's much-hyped Next Generation Squad Weapon, but at least they finally have an honest-to-God prototype to play with 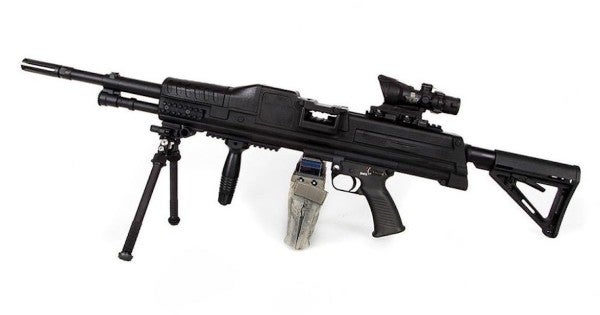 Army officials may have some lofty aspirations for the service's much-hyped Next Generation Squad Weapon, but at least they finally have an honest-to-God prototype to play with.

The NGSW-T delivery is separate from the contract that AAI received alongside four other defense contractors last year to whip up prototype Next Generation Squad Automatic Rifles (NGSAR) for the service. That demonstrator should end up in Army hands by June of this year, according to the company.

“Moving from contract award to delivery of a revolutionary, next-generation weapon in just 15 months not only demonstrates the maturity of our technology, but also the project execution excellence our team possesses to rapidly fill critical warfighter needs on schedule,” said Textron senior VP Wayne Prender in a statement.

The Army is looking for some unique features in its new rifle. NGSW team leader Arthur Fiorellini previously detailed the Army's requirements in an interview with Task & Purpose in February, including chambering in 6.8mm, a suppressor base designed to compensate for the intermediate round, a miniaturized ballistics computer, and a specially-designed fire control system, among other goodies.

Based on those requirements, AAI's submission has a good shot at forming the basis of the Army's next standard-issue service rifle. As The War Zone notes, not only do Textron and its subsidiaries have years of experience supplying automatic weapon prototype demonstrators to the Army, but the company recently unveiled a rifle with its cased-telescoped ammo that's an “obvious starting place” for the Army's next 6.8mm weapon:

The existing weapon has a general shape very similar to the service's existing M4 carbine and features many of the same controls as other AR-15/M16-series firearms and derivatives, including the fire control selector and t-shaped charging handle.

This general commonality with the Army's existing standard issue weapon could make it particularly attractive. Any time a major U.S. military service adopts a new rifle, it's not only a major logistical undertaking, but one that puts significant strains on training, as well.

Whether all of this will add up to the 'iPhone of lethality' that Army officials described to Task & Purpose back in February remains to be seen. But at least Army officials will finally have a physical rifle to sink their teeth into.

SEE ALSO: The Army's Next-Generation Rifle Will Be The iPhone Of Lethality, Officials Say

WATCH NEXT: The Next Generation Squad Weapon Finally Has A Bullet