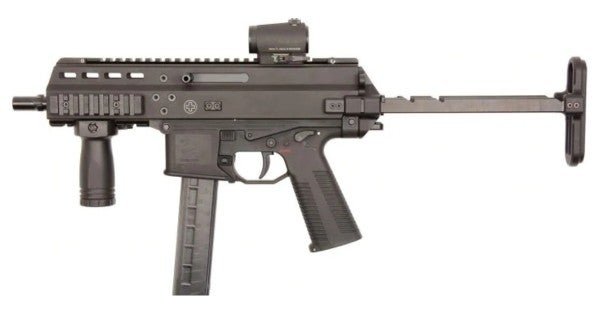 The Army has settled on its next submachine gun for security forces responsible for protecting top military leaders downrange.

The award will furnish the service with 350 APC9Ks, with an option to acquire up to 1,000 of the compact 9mm weapons.

While the Army has a handful of MP5 submachine guns in its inventory already, the service has been angling for a new 9mm “sub compact weapon” chambered in 9mm since last year.

PSD military personnel “require weapons with greater lethality than pistols that are more concealable than rifles,” the ACC special notice posted in August stated. “The ultimate objective of this program is to acquire a highly concealable Sub Compact Weapon (SCW) system capable of engaging threat personnel with a high volume of lethal force while accurately firing at close range with minimal collateral damage.”

The service initially planned on picking up a batch of 10 concealable SCW from gunmakers through sole-source contracts before abandoning those plans to “reassess its needs.” In the end, it looks like Brugger & Thomet's APC9K ended up beating out those offerings from big-name gun makers like Beretta, Sig Sauer, Colt, and Heckler & Koch.

Here are some details on the APC9K, per Guns.com:

Details on the APC9K are slim. Austria's counter-terror unit, EKO Cobra, uses a similar version of the gun which they list with a slightly longer barrel as being 15.9-inches overall. The standard APC9 is a 9mm blowback action three-position select-fire SMG that fires from a closed bolt at a cyclic rate of 1,080 rounds-per-minute.

Using 15 to 30 round translucent polymer magazines, the compact room broom features a top rail for optics and backup sights.

Even better: Just watch it in action!

SEE ALSO: The Army Finally Has Its Hands On A Next-Generation Rifle Prototype

WATCH NEXT: The MCX Rattler In Action