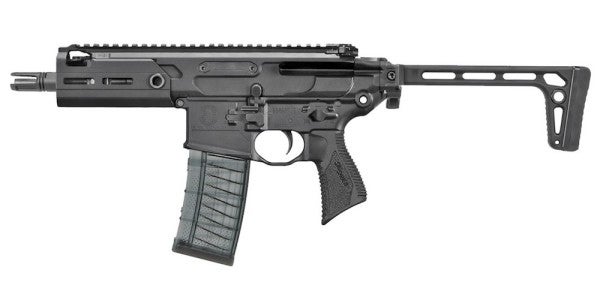 The contract with Sig Sauer, managed by U.S. Army Contracting Command (ACC) and released on Feb. 1, detailed SOCOM’s plan to purchase 10 MCX Personal Defense Weapons (PDW) conversion kits that, built on the lower receiver of an M4A1, can chamber both .300 Blackout cartridges and standard 5.56 mm rounds.

SOCOM had announced its intent to adopt a new PDW for close-quarters combat in March 2017, but the military took a direct contract with Sig Sauer over a bidding competition because “sample systems are needed quickly to be used in formal combat evaluations,” the ACC said. Both the initial request for information and subsequent award were first reported by The War Zone.

Although the MCX Rattler itself — billed by Sig Sauer as the most “discreet platform” ever built at the request of “elite military units” — doesn’t explicitly appear in the ACC’s Feb. 1 announcement, the weapon's 5.5-inch barrel and “thin, side-folding ‘skeleton’ buttstock” are a “perfect match” for the compact MCX platform the firearms manufacturer showed off last month at the SHOT Show in Las Vegas, Nevada, according to the War Zone.

“This compact firearm can be had in short-barrel-rifle and pistol configurations and provides a rifle-caliber setup in as compact of a frame as possible,” the company announced during SHOT Show’s final day on Jan 26. “This short, compact size is a boon for members of law enforcement, the military and the shooting public who want a compact, easy-to-carry firearm.”

Fresh off a successful new contract for the Army’s Modular Handgun System, Sig Sauer was eager to showcase the MCX Rattler and sister MCX Virtus assault rifle at SHOT Show, touting the latter as the “ultimate modular platform” in the same vein as the P320 9mm handgun. But as The War Zone originally noted, the real appeal is in those .300 Blackout cartridges, developed by Advanced Armament Company in the early 2000s to minimize sound output without sacrificing accuracy or stopping power.

Time will tell how the MCX Rattler actually holds up during tests. And while the Army Contracting Command may have snapped up the Rattler due to Sig’s willingness to keep that sweet, sweet DoD moolah flowing, the ACC isn’t ruling out other contenders; according to the announcement, “any responsible source who believes to be capable of meeting the requirement may submit a capability statement, proposal, or quotation, which shall be considered by the agency.”

Better dust off those designs you’re sitting on…