SOCOM Is Doubling Down On The ‘Super SAW’ Machine Gun 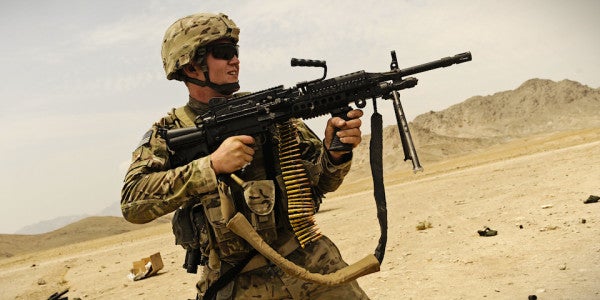 The Department of Defense recently awarded FN America, a South Carolina-based arms manufacturer, a $13.45 million contract to provide both the 5.56mm Mk 46 and 7.62mm Mk 48 light machine guns to SOCOM, The Firearm Blog reports. The contract represents an increase over SOCOM’s $11.5 million deal in 2010 for the two weapons, which FN specially designed for Naval Special Warfare starting back in 2004.

The Mk 46 and Mk 48, though they eclipse their SAW cousin in range, firepower, and ergonomics, have their own unique set of problems. The Mk 48 in particular “had a tendency to lose accuracy due to how much the weapon would shake during sustained firing,” The War Zone observed in May. “There were also problems with overheating and the gas system filling quickly with carbon, the latter issue leading to jamming unless operators thoroughly cleaned the weapon regularly.”

But it’s worth noting that the new contract with FN comes just a few months after SOCOM officials unveiled plans for a so-called “assault machine gun” chambered in 6.5mm Creedmoor, a smaller cartridge than the standard 7.62mm ammo that remains more effective for long-range fire support than the 5.56mm M249 SAW ammo. Here are the details of SOCOM’s new intermediate caliber ammo, per The War Zone:

The testing also showed that the 6.5mm versions of the weapons have 40 percent greater range and less recoil than their 7.62mm counterparts. The round was 30 percent less susceptible to wind drift, as well, making it more precise at those distances.

That transition, though initially hinted at in an April 2017 Military Times report, also appears to coincide with the U.S. Army’s long-running push for an intermediate caliber for its own M249 SAW and M4 carbine replacement in the Next Generation Squad Automatic Rifle, albeit chambered in the slightly-larger 6.8mm, as Task & Purpose reported in May. If the Army is whipping together the NGSAR with an intermediate caliber to fix warfighters’ so-called “range gap,” then it follows that perhaps SOCOM might pursue a new “assault machine gun” as well and leave the tried-and-true MK 46/Mk 48 duo behind, right?

Maybe not: SOCOM’s move to reinvest in its Mk 48 arsenal suggests that perhaps weapons planners have managed to identify a combination of existing upgrades to the beloved “super SAW” to accommodate the intermediate caliber — a move that, as The War Zone pointed out, might actually enhance the efficiency of the occasionally buggy Mk 48 or “improve the situation with minimal effort.” Indeed, another briefing slide from SOCOM's ammo update showed the development of an “assault machine gun” chambered in 6.5mm that appears to show the Mk 48.

A briefing slide detailing the timeline for the development of an “assault machine gun” chambered in 6.5mmU.S. Special Operations Command via Soldier Systems

All of this is to say that SOCOM’s super SAW may have picked up some additional bite. After all, the new contract does include upgrades and engineering assistance from FN America, which might suggest that SOCOM plans on rejiggering the super SAW for the next big fight.

SOCOM officials did not immediately respond to request for comment from Task & Purpose, but we’ll update this post with more information as it becomes available.